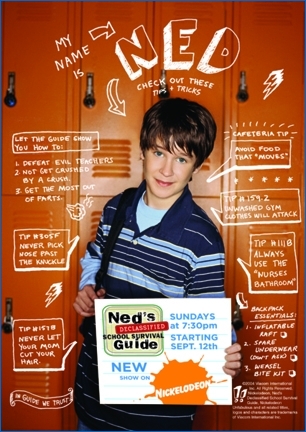 Your results may vary.

A Nickelodeon post modern live-action series with No Fourth Wall and no Laugh Track set entirely in a Middle School full of Anime Tropes. Now that we have your attention...

Ned Bigby (Devon Werkheiser) is the clever but Book Dumb protagonist who is dedicated to completing an all-encompassing guide "to help you survive school," covering every issue from tests and dodgeball to puberty and relationships. Each episode is split into two parts with a "Guide to...[Topic]," that has Ned and his two best friends (Gadgeteer Genius Simon Nelson "Cookie" Cook (Daniel Curtis Lee) and tomboy Jennifer "Moze" Mosely (Lindsey Shaw)) each having their own storyline that requires his advice on the subject.

At least Once an Episode when the moment for giving tips comes: the theme music starts, Ned turns to the audience, and begins, "If you're [someone] who's confused about [something], check out these tips." Despite customary Genre Blindness and Moze being the voice of reason, Ned seems permanently aware of the Fourth Wall, with other characters occasionally acknowledging it, to some surprise. In solving the current dilemma and Tip Subject, Cookie tries outlandish theories, Moze goes for the more practical solution and Ned usually applies a scientific rigor.

Originally the primary emphasis was delivering the tips and focusing on school matters such as homework, lockers and school clubs. But soon the stories expanded to focus on the complex relationships between the maturing characters and the tips focused on how to deal with social situations. A brief synopsis of these relationships would be:

While Ned and Moze are trying to work out their feelings for each other and their other Love Interests (which they have plenty of), they're surrounded by a cast of quirky students and teachers who will always ensure that Hilarity Ensues.

Ran for three seasons and ended in 2007. Never quite as popular as its contemporaries on Nickelodeon (i.e. Drake and Josh) but often considered to be a prized gem of a show. The writing was crisp and the characters were very well fleshed out.

According to Devon Werkheiser, a pilot was shot in 2008 about a sequel series in High School. It wasn't greenlit, sadly, and the actors have since moved on from Nick. Given the series' Present Day setting with the characters' graduating middle school in 2007, they would've graduated high school in 2011.

Tropes used in Ned's Declassified School Survival Guide include:
Retrieved from "https://allthetropes.org/w/index.php?title=Ned%27s_Declassified_School_Survival_Guide&oldid=1920297"
Categories:
Cookies help us deliver our services. By using our services, you agree to our use of cookies.