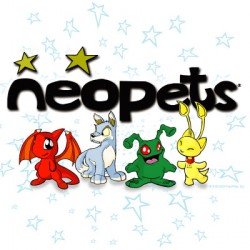 From left to right: a Shoyru, Lupe, Grundo, and Aisha.

Neopets started out with a website created by Adam Powell, launched in 1999. In short, it's the virtual pet site. The basic idea is you are a Neopian (i.e., an owner) with a limit of four Neopets per account. Owners can take care of their pets by feeding them and playing with them, but there are a number of things they can do: buy and sell items, play games, discuss on the Neoboards, explore Neopia, train and battle with their Neopets, and design a webpage. Some Neopians strive to become rich, others use it as a place to post Neopets fanwork, and still others use it to win contests.

Neopets has a lot of fiction: encyclopedia articles, short stories, a rich world, comics, game premises, and ongoing Story Arcs (known as "plots") which crop up every so often. And, if in need of inspiration, The Neopets Team lets talented users post Neopets-related articles, novellas and comic strips.

The site has since evolved into a franchise—video games have been released, as well as Nickelodeon shorts and a breakfast cereal. Neopets also provides a simple, efficient way of advertising—sponsor games. These games give easy Neopoints, so they're played by a lot of Neopians every day, which provides some good advertising. It's also rather successful with merchandise; McDonald's and Burger King even had Neopets plushies as part of their kids' meals some years ago.

Special mention goes to the Neo Quest series of RPGs, which have so many tropes they all have their own page. The Neopian Times Writers Forum (NTWF for short) also has its own page, just be careful of the insanity. Lastly, a Gaiden Game to the main Neopets site, Petpet Park, also has a page.

Tropes used in Neopets include:

In a secluded alley behind the Colosseum are gathered a group of Neopets... This is Punch Club.
"Would you like some punch?"

"No, the Tiki Man is quite safe, if he fell into the Tombola he would just be covered with little pieces of paper."

Sloth: How dare you interrupt my "Resistance Is Futile" speech!