Never Speak Ill of the Dead 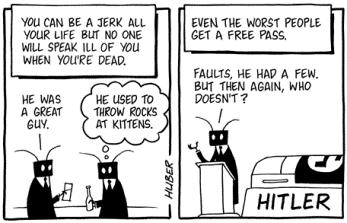 Death creates a prejudice in favor of the deceased ... I should like to find someone who knew Elizabeth Barnard and who does not know that she is dead! Then, perhaps, I should hear what is useful to me -- the truth.
—Hercule Poirot, The ABC Murders

Regardless of how disliked or embarrassing a person was in life, no matter how odd they were considered, or what crimes they had committed, the moment they leave this mortal coil, a Nostalgia Filter falls into place causing the deceased to be remembered as being better than they were, for the most part. For some people, the reasoning is that the dead person isn't here to defend themselves anymore, or at the very least cannot continue to do the unpleasant things they were reviled for anymore.

An Asshole Victim can be "spared" this provided they were enough of an asshole. Alternatively, can be a justification for Alas, Poor Scrappy.

See also Treachery Cover-Up and Unacceptable Targets. If people choose to lie to preserve the departed's reputation, they're using The Power of Legacy.

Contrast with Speak Ill of the Dead for the serious version and The Fun in Funeral for less serious ones.

No real life examples, please; just because they were disrespectful doesn't mean we need to be.

Examples of Never Speak Ill of the Dead include:

Hey, when you die, you get more popular than you've ever been in your whole life. You get more flowers when you die than you ever got at all. They all arrive at once, too late. And people say the nicest things about you! They'll make shit up if they have to! "Oh yeah, he was an asshole, but a well-meaning asshole." "Yeah, poor Bill is dead." "Yeah, poor Bill is dead." "Poor Tom is gone." "Yeah, poor Tom." "Poor John died." "Yeah, John." "What about Ed?" "Naw, Ed, that motherfucker, he's still alive, man! Get 'im outta here!"

Joker: You are a vicious bastard, Rotelli. I'm glad you're dead.

Topper Harley: He really was a wiener.
Ramada: Don't get me started.

"Have you ever noticed what heaps of good people die, Anne, dearie? It's kind of pitiful. Here's ten obituaries, and every one of them saints and models, even the men. Here's old Peter Stimson, who has 'left a large circle of friends to mourn his untimely loss.' Lord, Anne, dearie, that man was eighty, and everybody who knew him had been wishing him dead these thirty years."

"THIS IS PRECISELY THE KIND OF POLITICIAN... *dies* ...who will be greatly missed."

"But all that was forgotten once he took his final breath... yes, even *HONK* turn into top blokes after death."

Jack: What is with you, Ianto? Ever since Owen died all you've done is agree with him!
Ianto: My mother taught me never to speak ill of the dead, even if they do most of the talking for themselves.

Brock: Only the good die young and he wasn't good! So where is he?
Terry's brother: He's dead.
Reba: We're so sorry for you loss.
Brock: He was a good man.

Michael Jackson is dead,
Don't pretend you give a shit
You motherfucking hypocrites
Remember what you said he did?

It's fun to eulogize
The people you despise
As long as you don't let 'em in your school.

Antony: I come to bury Caesar, not to praise him.
The evil that men do lives after them;
The good is oft interred with their bones;
So let it be with Caesar....

And Lincoln, who got mixed reviews,
Because of you, John, now gets only raves!

Varian: She's going to destroy all that Magni tried to do! All that he... he died for!
Anduin: There's no spell, Father. Magni wanted to believe there was rather than the truth- that he drove Moira away because she wasn't a male heir.
Varian: You spit on the memory of an honorable man, Anduin.
Anduin: You can be an honorable man and still make mistakes.

"We're not making light of your feelings. I am sorry you lost your friend. Hell, I'll go so far as to say he shouldn't have died. But if they're idiots in life, with an idiotic demise, they should not be revered as anything else in death."

Mourner: He will be missed.
Butch: Oh, bullshit. He was an asshole and you're glad he's dead.

Hinjo: "I see. Then you were the one who made the decision to destroy the Gate rather than let it fall into Xykon's clutches."
O-Chul: "I did make that decision, and it was my blade that did the deed. (I shall say no more about it, lest I speak ill of the dead.)"

DoytHaban: You're not eulogizing me when I die, even if it means I have to take you with me to make sure.

Lex Luthor: Goodbye, Grodd. It could have gone the other way.
Grodd: It really could have, couldn't it?
Lex Luthor: No, but why speak ill of the dead? * opens the airlock*