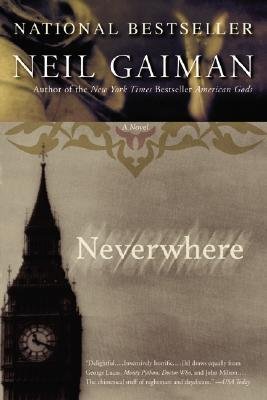 "Dear Diary.
On Friday I had a job, a fiancee, and a life that made sense. (Well, as much as any life makes sense.) Then I found an injured girl bleeding on the pavement, and I tried to be a Good Samaritan. Now I've got no fiancee, no home, no job, and I'm walking around a couple of hundred feet under the streets of London with the projected life expectancy of a suicidal fruitfly.
There are hundreds of people in this other London. Thousands, maybe. People who come from here, or people who have fallen through the cracks. I'm wandering around with a girl called Door, her bodyguard, and her psychotic grand vizier. We slept last night in a small tunnel that Door said was once a section of Regency sewer. The bodyguard was awake when I went to sleep, and awake when they woke me up. I don't think she ever sleeps. We had fruitcake for breakfast; the marquis had a large lump of it in his pocket. Why would anyone have a large lump of fruitcake in his pocket? My shoes dried out mostly while I slept.I want to go home."

Neil Gaiman was asked to do a television series for the BBC. Lenny Henry helped, too. Unfortunately, they fiddled with it, and while the end result was good, it was not entirely true to Gaiman's vision. So he went home, and used his days off to write the story he wanted to tell.

It was later adapted by Mike Carey and Glenn Fabry as a miniseries for Vertigo Comics. It was not well-liked.

There's a movie coming out. It's been in Development Hell since the book was written, but someone may be digging it up...

Tropes used in Neverwhere include:

The stuffed crocodile hanging from the ceiling; the leather-bound books, an astrolabe, convex and concave mirrors, odd scientific instruments

It made some sort of sense, Richard thought: they were a team, after all.

She was dressed in a variety of clothes thrown over each other: odd clothes, dirty velvets, muddy lace, rips and holes through which other layers and styles could be seen. She looked, Richard thought, as if she'd done a midnight raid on the History of Fashion section of the Victoria and Albert museum, and was still wearing everything she'd taken.

Mr. Croup: It is saddening to reflect that there are folk walking the streets above who will never know the beauty of these sewers, Mister Vandemar.

Richard: There are no shepherds in Shepherd's Bush. I've been there. It's just houses and stores and roads and the BBC. That's all.
Hunter: There are shepherds. Pray you never meet them.