Everything About Fiction You Never Wanted to Know.
Jump to navigation Jump to search
/wiki/New World Ordercreator 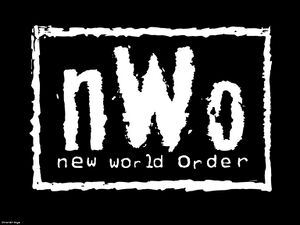 The New World Order (abbreviated as "nWo") was a professional wrestling stable which formed at World Championship Wrestling's Bash at the Beach 1996 pay-per-view. Months prior to the show, "The Outsiders" -- Kevin Nash and Scott Hall, freshly-released by the World Wrestling Federation—terrorized WCW, threatening the company with war. The duo also said a "third man" was coming to help them, which led many fans (and even a few industry pundits) to believe Hall and Nash (Razor Ramon and Diesel in the WWF) were actually sent by the WWF to "invade" WCW—a belief which made people interested in WCW's product. During the main event of Bash at the Beach, All-American Face Hulk Hogan was revealed to be the "third man"—and in the post-match interview, Hogan (who would call himself "Hollywood" Hogan during his run with the group) labeled himself, Hall, and Nash as "the new world order of professional wrestling".

Once the nWo was established, it attacked the entire WCW roster indiscriminately, forcing faces and heels into an Enemy Mine situation to oppose the trio. The nWo soon added three new members to round out the Five-Bad Band: Ted DiBiase (implied to be the financial backer of the group), The Giant (WCW's first defector and the group's powerhouse), and Syxx (Sean "1-2-3 Kid" Waltman, who served as the group's token Cruiserweight).

The nWo spread like a virus throughout WCW and dominated storylines for several years, bringing with it both the good (the nWo angle helped WCW beat the WWF in the Monday Night Wars for 84 weeks in a row from 1996 to 1998) and the bad (the Finger-Poke of Doom and alleged backstage politics which killed the creative direction of the product). After a split into the "Hollywood" and "Wolfpac" groups, and a "reunion" of the two groups (following the Fingerpoke Of Doom), the group slowly faded away from WCW programming as the company's fortunes began to turn south. A final attempt at reviving the group in 2000, but this attempt failed, and WCW was driven out of business in early 2001.

The original nWo triumvirate of Hogan, Hall, and Nash were brought back as the nWo in February 2002—this time by Vince McMahon, who sought to destroy the WWF when he saw what his own creation had become in the hands of Ric Flair (who, in kayfabe, was co-owner of the company). The return of Hogan to the WWF as part of the nWo resulted in a legitimate dream match -- The Rock vs. "Hollywood" Hogan at WrestleMania 18—but an injury to Kevin Nash in July (during a ten-man tag team match on Raw) caused the nWo angle to be dropped in its entirety practically the next week.

After Hulk Hogan arrived in TNA in early 2010, Hall and Waltman (the latter of which had gained notoriety as X-Pac in the intervening years) formed "The Band" and tried to associate themselves with Nash, Hogan, and former WCW President/nWo supporter Eric Bischoff. Hogan and Bischoff wanted little to do with them, and while the duo turned on Nash shortly after, they would later bring Nash into the group as a swerve on Eric Young—and then Young joined them just weeks later (giving him Stockholm Syndrome in the process). This nWo variant fizzled out as well when Hall's personal demons caught up with him again and both Nash and Waltman disappeared from TNA programming.

The nWo should not be confused with the infamous conspiracy theory.

New World Order provides examples of the following tropes:
Retrieved from "https://allthetropes.org/w/index.php?title=New_World_Order&oldid=1927606"
Categories:
Cookies help us deliver our services. By using our services, you agree to our use of cookies.