Everything About Fiction You Never Wanted to Know.
Jump to navigation Jump to search
/wiki/Nichelle Nicholscreator 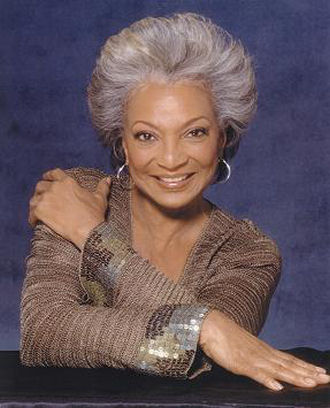 "There's a black lady on TV and she ain't no maid!"
—Whoopi Goldberg

Very much not shy to shuck her clothes. (see: Star Trek V: The Final Frontier) Fans approve of this, as Nichelle is quite possibly the living definition of a Foxy Grandma.

Has lent her support to several fan productions, along with costars Walter Koenig and George Takei.

Famously took William Shatner down several hundred pegs. When Shatner interviewed her for Star Trek Memories, she said, "All right, now I'm going to tell you why I despise you." She then ripped into him for, essentially, being an arrogant cad on set - which he kind of was. He and Nic have since made up, at least partly. In fact, by ripping him apart, she may have begun his redemption.

Almost quit Trek, but a fan told her that she was breaking new ground; it was inspiring for America to tune in every week and see the human race being represented, at least in part, by a black woman. The fan? The Rev. Dr. Martin Luther King Jr., and of course you don't argue with him. Besides, King was right... two decades later, a young African-American woman who had grown up watching Nichelle on Star Trek asked for a recurring role on Star Trek: The Next Generation and credited Nichols with being her inspiration to go into acting. This young lady was Whoopi Goldberg, and she played Guinan, the mysterious barkeeper in Ten Forward, for the rest of the series' run.

In an even more awesome CMOA, a young African-American woman applied to NASA, citing Nichols as her inspiration to go into space. This was Dr. Mae Jemison, the first female African-American astronaut. Life Imitates Art indeed!

In a truly sad case of irony, her brother was one of the members of the Heaven's Gate cult, who committed suicide in order to join a flying saucer he believed was behind the Hale-Bopp comet.