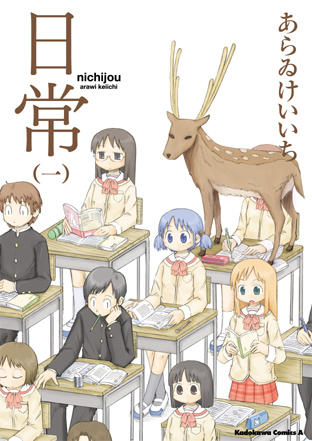 Nichijou (or My Ordinary Life) is a Japanese comedy Manga by Keiichi Arawi. The Manga began serialization in the December 2006 issue of Kadokawa Shoten's manga magazine Shōnen Ace, and received an anime adaptation by Kyoto Animation that premiered on Japanese television in April 2011.

It is a Sketch Comedy series about a group of ordinary High School students and their teachers. Except for the robot girl with a wind-up key in her back. Or the girl who keeps bringing guns to school that she procures from nowhere. Or the Principal who has a penchant for wrestling deer. Or the Science Teacher who occasionally poisons her students (and herself)......

Those living in the US can watch this anime legally at Crunchyroll.

Tropes used in Nichijou include:

Retrieved from "https://allthetropes.org/w/index.php?title=Nichijou&oldid=1815790"
Categories:
Cookies help us deliver our services. By using our services, you agree to our use of cookies.