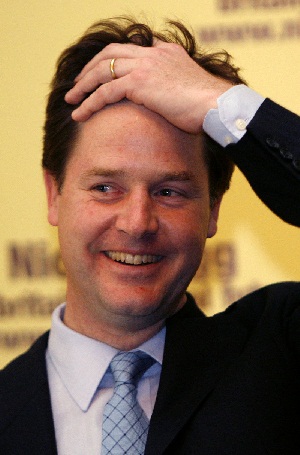 Former leader of the Liberal Democrats and former Deputy Prime Minister of the United Kingdom as part of a coalition deal with the Conservative Party that took place from 2010-2015.

He was propelled into the limelight of British politics leading up to the General Election thanks to a strong performance in the three prime ministerial debates, becoming something of an Ensemble Darkhorse thanks to his previous relative obscurity. Although the Liberal Democrats failed to break through as many predicted - they actually lost 6 seats in the election despite a 1% increase in their share of the popular vote overall - the resulting hung parliament made Nick Clegg something of a kingmaker. In a coalition with the Tories, the two parties made up a majority of seats - however neither Labour nor the Lib Dems secured enough seats for a Lib/Lab coalition that held a majority without involving the nationalist and Northern Irish parties.

Understandably, he has lost a lot of credibility among British leftists following the formation of the Conservatives-Liberal coalition, especially considering one of his campaign's "marketing tools" was encouraging people to vote Liberal to keep the Tories out. This was mainly because, although British politics has moved on to the point whereby on some issues (notably civil liberties) Labour were more to the right than the Tories and so they are not necessarily closer in principle to the Lib Dems, a lot of Lib Dem seats have Tories as the principal opposition, especially in the The West Country, where Labour's support is practically non-existent. And with Gordon Brown deemed impossible to support as Prime Minister, the Labour party had no clear leader or strategy for negotiations, as the negotiating team later admitted. Clegg had also stressed beforehand that the Lib Dems would be obligated to 'talk first' with whichever party had won the most seats as they had the most right to form a government; many grassroots Lib Dems were angry this led to the talks being followed through with a deal. The general perception, fair or not, that the Lib Dems are acting largely as lapdogs for the Conservatives while in government has not particularly helped this impression, and the Conservatives appear to have successfully transferred the fallout for some of their less-popular policies onto Clegg and the Lib Dems since taking office; correspondingly, Clegg's popularity and that of his party has sunk to new lows since then.

The popularity of Clegg following the first debate is often referred to by the media as 'Cleggmania'. Clegg is also MP for Sheffield Hallam, and is not to be confused with the other Mr. N. Clegg from Yorkshire (yes, jokes have been made).

Retrieved from "https://allthetropes.org/w/index.php?title=Nick_Clegg&oldid=1578214"
Categories:
Cookies help us deliver our services. By using our services, you agree to our use of cookies.