"Nicktoons" is Nickelodeon's official term for their original animated programs (but that is not the subject of this page).

Nicktoons (previously known as Nicktoons Network and Nicktoons TV) is also a sister network of Nickelodeon launched in 2002. It is Nickelodeon's 95% animation channel. It was mainly meant to compete with Cartoon Network and Toon Disney and started as a vault channel for Nickelodeon's huge animation library. In addition to running the animation that was first-run on Nick at the time, it also served as a vault for the animated shows that they didn't air anymore, like The Ren and Stimpy Show, Rocko's Modern Life, Doug, and Aaahh Real Monsters. 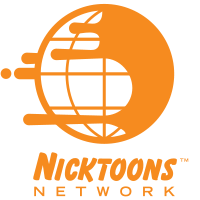 In 2006, it aired their first original show: Kappa Mikey. This followed with other independently-funded acquisitions it made in the later part of the 2000 decade, such as Skyland, Shuriken School, Edgar and Ellen, Ricky Sprocket, Three Delivery, The Secret Show, Wayside School, and Making Fiends,... 90% of them created in Flash.

At around 2009, less and less original Nicktoons were shown in favor of more action-oriented animated programs, presumably to compete with boy-focused Disney XD and Cartoon Network. Two live-action programs, The Troop (with a few animated special effects) and Big Time Rush (totally live-action) also aired on Nicktoons. All of the aforementioned original toons were either playing in the graveyard slots or scrapped, and they were investing in strictly superhero adaptations of Marvel Universe characters; with Disney having bought out Marvel Comics, that might change soon...

If you are looking for Nicktoons games, try Nicktoons Unite! and Nicktoons MLB.

Works created by Nicktoons include:
Retrieved from "https://allthetropes.org/w/index.php?title=Nicktoons&oldid=1719099"
Categories:
Cookies help us deliver our services. By using our services, you agree to our use of cookies.