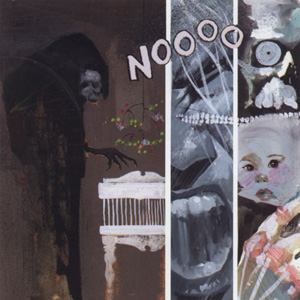 Some dreams are heart-warming visions of hope, filled with cute and cuddly creatures, so delightful they make you want to fall asleep right away—some dreams, but not all.

There are nightmares that chill your soul. They are a journey through a warped mirror of reality where Transformation Traumas abound and Primal Fears are on public parade. All our comforting certainties melt away, and chaos reigns supreme. Quite frankly, after a dream like that it would almost be a relief to encounter the Outer Gods dancing to the eldritch music of blasphemous flutes.

These nightmares can show off the emotional confusion and torment affecting a character. An effective way to show a character is having Bad Dreams is just to go into them and show the nightmarish sequence itself. Each bizarre image can dissect the issue facing them, showing the distortions the mind puts on them.

These dreams are often, though not always, associated with Deranged Animation. Hallucinations and supposedly funny nightmares also fall under this trope.

Examples of Nightmare Sequence include:

Retrieved from "https://allthetropes.org/w/index.php?title=Nightmare_Sequence&oldid=1809341"
Categories:
Cookies help us deliver our services. By using our services, you agree to our use of cookies.