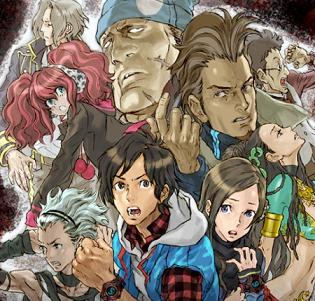 You have been chosen to play the Nonary Game.

"On April 14th, 1912, the famous ocean liner, known as the Titanic crashed into an iceberg. After remaining afloat for two hours and forty minutes, it sank between the waters of the North Atlantic. I will give you more time. Nine Hours. That is the time you will be given to make your escape."

Junpei, a normal 21-year-old college student, arrives at home one night to find his window open. Upon closing it, he spots a cloaked figure in a gas mask in the reflection—and the last thing he can remember before passing out is being told that he's just been chosen to participate in the "Nonary Game"...

He then wakes up in a third-class room on an early 20th-century ship. Upon escaping from there, he finds out that he's trapped on the ship with eight other people who were similarly chosen, and forced to play the game lest the bombs planted inside their bodies go off. Needless to say, things get worse, and they're forced to trust each other and race against the 9-hour time limit to figure out what's happening and why they're on the ship.

The first game in the Zero Escape series, Nine Hours, Nine Persons, Nine Doors, or 999 as it is sometimes known, itself plays as one part "escape from the room" games, one part Saw and one part Visual Novel. The puzzles are the game play and the visual novel parts influence how the game will progress. There are several branching paths and your decisions impact the ending.

It sadly never was released outside Japan and North America. Even then, most game stores had to specifically request the game to stock. As an original DS game, it can be imported and played on original "phat" style DS and the DS Lite redesign.

A sequel titled Virtue's Last Reward (in the original Japanese, Kyokugen Dasshutsu ADV Zennin Shibô Desu, or roughly, Extreme Escape Adventure: Good People Die) was announced for the Nintendo 3DS and Play Station Vita in August 2011. It was released in Japan on February 16, 2012, and in America on October 23 of that year.

Seek a way out!

Santa: Look, Ace! It's some kind of snowman secret meeting!
Ace: Those are just bags full of sand. You use them as a counterweight when you're lifting something with a pully system.
Santa: Man, you're too serious...

"This game is fiction. All names, characters, and incidents portrayed in this production are fictitious."