Ninja Gaiden is a series of video games originally developed by Tecmo. Released first as an arcade title, it made its way to the Nintendo Entertainment System, Nintendo Game Boy, TurboGrafx-16 and Sega Master System, then was revived for the Microsoft Xbox under Tomonobu Itagaki's "Team Ninja", the same creators and designers behind the Dead or Alive series. The NES games are hailed for being among the first to use a video game as a vehicle to tell an elaborate story.

The main character is Ryu Hayabusa, a Ninja and member of the Dragon Clan, who gets into government conspiracies, kicks loads of ass and slaughters legions of supernatural beings along the way. 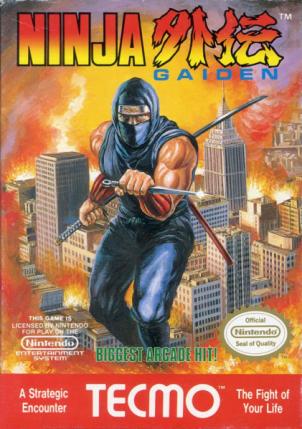 In the first game, Ryu receives a letter from his father Joe Hayabusa, saying that should he not return, Ryu is to journey to America and contact a man named Walter Smith. Believing his father dead, Ryu goes to America to carry out this request. After battling a large man with an axe in a bar, he is subdued by a woman with a tranquilizer gun. He awakens in a prison cell, where the woman (Irene Lew) frees him and gives him a mysterious, grotesque statue. Ryu is puzzled by this, but presses onward. He meets with Smith, who identifies the statue as one of the Demon Statues, a pair of Artifacts of Doom he and Joe discovered and vowed to protect. As Ryu and Smith talk, the statue is stolen by another ninja. Ryu gives chase, and recaptures the statue, but returns to find Smith dying. Ryu vows to carry on his work, protecting the Demon Statues.

However, Ryu is captured by the CIA and brought before A. Foster, the head of the agency. Foster reveals that Irene is one of their agents, and that she is tracking down a man known as Jaquio, who seeks to release the powerful demon sealed in the statues. Foster orders Ryu to take out Jaquio; Ryu, remembering his oath to Smith, complies. Air-dropped into the jungles of Brazil, he makes his way to Jaquio's fortress, where he finds Jaquio has Irene at gunpoint. Jaquio reveals he has the second Demon Statue already, and demands Ryu's statue in exchange for Irene's life; Ryu, being new at the whole hero thing, complies. Jaquio's an old hand at villainy, however, and simply absconds with the statues and the girl... but not before sending Ryu hurtling down a Trap Door to the catacombs below.

Undaunted, Ryu fights his way to the top of the fortress, where he again encounters Jaquio and Irene... as well as Ryu's father, who, while not dead, is under Jaquio's mind control. Ryu gets the better of Jaquio in battle, and in desperation, Jaquio launches a magic bolt at Ryu, but his father comes to his senses, intercepts the bolt, and dies. The enraged Ryu proceeds to kill Jaquio... but he's too late, for Jaquio has released the demon from the statues!

Ryu bravely fights the demon, sealing it once more. After the battle, Foster radios Irene and orders her to assassinate Ryu and take the statues. Irene hesitates, and Ryu takes her radio and tells Foster the next time they meet, it will be as enemies.

Quite a bit more elaborate than the Save the Princess plots of the day, isn't it?

Ninja Gaiden II: The Dark Sword of Chaos and Ninja Gaiden III: The Ancient Ship of Doom both had similarly complex plots, centered around their titular MacGuffins. Due to space considerations, we won't get much more into detail here; however, they offer just as many, if not more, twists and turns as the first game.

As for the gameplay that takes place between the cutscenes? Ninja Gaiden played a lot like Castlevania... only on steroids and speed. The games were the very epitome of Nintendo Hard, with enemies coming at you from every direction at once. Gamers didn't seem to mind, however: even those who found the challenge to be too much suffered through it anyway to see the next chapter in Ryu's saga.

Aside for a compilation of the trilogy on the Super Nintendo Entertainment System, the series was silent, until Ryu was added to the roster for Team Ninja's Dead or Alive series, where Ryu's basically the only male character people seem to like as much as the girls. 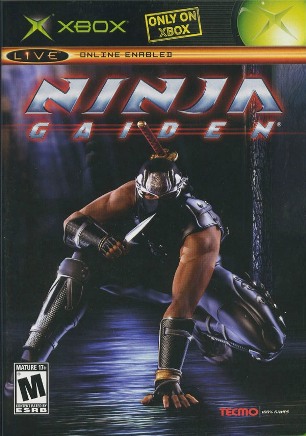 Sometime in 1999, Itagaki and Team Ninja began work on their first "action" title, aside from their on-going Dead or Alive series. Although then-Tecmo wanted a tie-in for this new revival with the NES trilogy, this Xbox version of Ninja Gaiden, released in 2004, involves none of the elements. In an interview, Itagaki mentioned he "prefer not to be influenced by or base it on the original story". While Ryu's still the protagonist, none of the above elements are explicitly mentioned.

The story establishes Ryu's a member of the Dragon Ninja Clan, charged with protecting the Dark Dragon Blade, a BFS imbued with some pretty extraordinary powers. After the game's tutorial level, he's informed that the Hayabusa Village has been destroyed. When Ryu investigates, a samurai pledged to the Holy Vigoor Emperor, Doku, kills him with the Dark Dragon Blade.

Don't worry, he gets better.

Thus, the game embarks Ryu upon a ferocious quest for revenge and the retrieval of the Dark Dragon Blade. The details of the plot are convoluted and don't add up to anything particularly extraordinary, but Ryu slices and dices his way through Vigoorian soldiers, tanks, zombies, ninjas and ghost piranhas.

The Xbox version is, as the kids these days say, difficult ...really, really difficult... as in "throw-your-controller-at-the-screen-and-scare-the-dog difficult". In contrast to other Hack And Slashers, enemies avert Mook Chivalry and have no compunctions about suffocating the player at every available moment. In fact, beating this game is an achievement. Hell, there was an Updated Rerelease called Ninja Gaiden Black which not only fixed gameplay imbalances, placed more enemies and bosses and added in "Combat Missions", it included two new modes: a "super-duper-mega-easy" mode and an "even harder than Harder Than Hard mode"! Unfortunately, it didn't help the "super-duper-mega-easy" mode was quite hard itself, difficult to the point of inducing trauma.

The game was critically acclaimed by all, with many praising its preserved difficulty from the NES trilogy, alongside gorgeous visuals and attention to detail in combat and environments by pushing the Xbox beyond its hardware limitations. An Enhanced Remake of Ninja Gaiden Black called Ninja Gaiden Sigma for the Sony Play Station 3 was released in 2007, rounding out the last gameplay additions with a new character, new weapons and enemies, while making it look more pretty with the console's high-definition capabilities. It also removes or simplifies some puzzles that contained too much back-and-forth.

In 2008, Ninja Gaiden: Dragon Sword was released for the Nintendo DS. This Gaiden Game sequel set six months after Ninja Gaiden tells of Ryu and his journey to find the Dark Dragonstones that can resurrect an ancient Dark Dragon. In the same year, the true sequel Ninja Gaiden II was released for the Xbox360, where another Artifact of Doom the Dragon Lineage were guarding, the Statue of the Archfiend, is stolen. Ryu must travel the world chasing the Four Greater Fiends as they attempt to resurrect the Archfiend itself. Both games retain the difficulty of Ninja Gaiden (Ninja Gaiden II arguably even harder) and the stories are serviceable, yet the latter's almost completely nonsensical, with Everything Trying to Kill You more aptly applied. For example, at one point, a giant armadillo with marginal fire Elemental Powers appears with no apparent connection to the villains.

Following the release of Ninja Gaiden II, Itagaki stepped down from Team Ninja and left the now merged Tecmo Koei. Current series director and producer Yosuke Hayashi took over and released an Updated Rerelease of Ninja Gaiden II on the Play Station 3 as Ninja Gaiden Sigma 2. Notably, the game partly resolves the nonsensical nature of the plot in the 360 original, but also throws in new characters and scenarios, a co-op mission mode, a "Chapter Challenge" mode and a prologue that links Dragon Sword to current continuity (Ninja Gaiden II never makes a mention of Dragon Sword). It also significantly tones down the 360 game's gore and the number of enemies, making them more resilient instead.

Ninja Gaiden 3 was release in March 2012 on both Playstation3 and Xbox360. Team Ninja's also considering a release on the Nintendo Wii U, under a new heading Ninja Gaiden 3: Razor's Edge. Contrary to his predecessor, Hayashi wants to make the game "more accessible" with the inclusion of the optional "hero play-style", which provides an auto-guard at low health for beginners. Long time fans are quite displeased with this choice, although the game itself is still harder than average. For the first time in the series, Ninja Gaiden 3 features Competitive Multiplayer. Set some time after Ninja Gaiden II, Ryu receives a request from the Japanese government, after terrorists take the British Prime Minister hostage, demanding his appearance. He travels to London and faces the mysterious foes, led by the enigmatic "Regent of the Mask". During their fight, the man places a curse on Ryu's right arm, making him feel the pain and hatred of the people he killed.

Ninja Gaiden 3 also marks the return of scriptwriter Masato Kato to the series, to bring back the sort of deep narrative seen in the NES trilogy. It effectively ties the modern games into overall continuity. The action also has a much more cinematic and dramatic feel than the first two games.

Alas, the third game received very mixed reviews overall (including a memorable 3/10 on IGN!), criticizing the heavy use of Quick Time Events and an excessively streamlined gameplay compared to the previous titles, among other things.

Now with a good Character Sheet, character tropes go there.

Tropes used in Ninja Gaiden include:

Retrieved from "https://allthetropes.org/w/index.php?title=Ninja_Gaiden&oldid=1862361"
Categories:
Cookies help us deliver our services. By using our services, you agree to our use of cookies.