Everything About Fiction You Never Wanted to Know.
< No. 6
Jump to navigation Jump to search

Here be all the Ho Yay to be found in No6.

Nezumi:“Don’t use a word like ‘attracted’ so lightly. That’s a really serious word. It’s something you say to someone you care about very deeply.”
Shion: “Then how should I say it? Should I say I love you?” 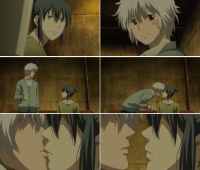 That man tried to kill you, so he had to receive punishment.

A kiss of death. The innermost part of Shion's body pulsated in response. He shook his head. No matter how seductive, he had to reject anything that tried to lead him to death.