No Badass to His Valet 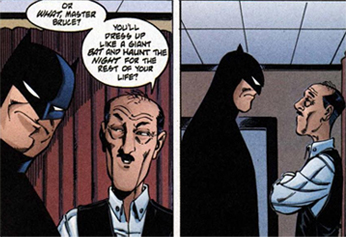 Glare all you want, Bruce; Alfred's not impressed and you both know it.

"You tell me where my suit is, woman!! We are talking about the greater good!"
"'Greater good?!' I am your wife! I am the greatest good you're ever gonna get!"

—Frozone and wife, The Incredibles

Archetypical tough guys and anti-heroes often give off an aura of authority and attitude around them, a countenance that gives even the most courageous individuals feelings of doubt and fear; a warning to all to treat the character with caution. As a result, these characters are apt to intimidate anyone they meet into doing what they want, whether it be doing their bidding or merely just leaving them alone.

Sister Trope to No Hero to His Valet.

Examples of No Badass to His Valet include:

Sothe: Stop scowling at me like that. You're making me uncomfortable.
Nasir: It's not just you. Ike always looks like that. Don't mind him, just keep talking.