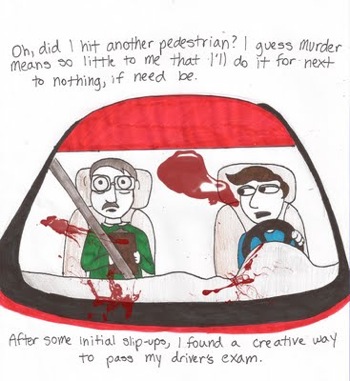 Curly is a naturally-occurring source of cold fusion. Aubrey doesn't have time for your silly mind games, Joker.

"It's interesting that after 2.7 billion years of evolution, the trait that best secures one's genetic line is 'being delicious'."
—Caption, Comic #27

No Black Plume is a web comic started in July 2011 by Matthew "Curly" Jeffers (writer) and Aubrey Zepeda (artist). The comics are very short, usually single-panel, and usually deal with absurd topics and situations, as well as science, literature, and social trends. There is no storyline or recurring characters, and most of the tropes are mocked or played for laughs. The comic is hosted on Blogger and updates Mondays, Wednesdays, and Fridays.

In addition to the comic, each update comes with a "Something Cool", where Curly and Aubrey alternate discussing something they enjoy and expounding the reader to check it out.

Tropes used in No Black Plume include:

Played for laughs again in the six-part "Science Will Ruin Your Life" arc.