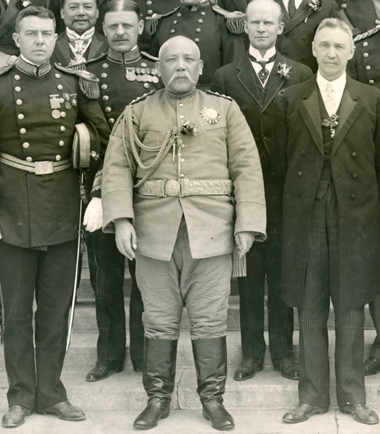 Yuan Shikai became president, manipulated a rubberstamp assembly into giving him full powers, and then declared himself emperor. It didn't work out.

Yuan Shi Kai, the leader of the Beiyang Army, became the President of China. Yuan was not a very popular leader, due to him agreeing to the Japanese 21 Demands (which asked for concessions in Manchuria and Mongolia) and trying to declare himself Emperor. Actually, that was to be expected - in Chinese history, the people who overthrew the previous dynasty would often start their own. However, people wanted an end to imperialism. Yuan was forced to resign in 1916, and died soon after. His rule undid many of the successes of the 1911 Revolution, including all hope of a democratic government. He also directly lead to the Warlord period.

When Yuan left, the central government broke down entirely. Yuan's military governors then became Warlords, and they carved out their own states from China. Some Warlords were effective rulers, but most... not so much. Warlord rule was characterized by extremely high taxes (some even took taxes years in advance), conscription into their personal armies and a lack of infrastructure. Some Warlords would force their peasants to grow opium to support them. It's important to note, though, that warlord's attitudes varied wildly. One warlord was known to be a devout Christian and took to baptizing his soldiers with a firehose before battles.

In the south, the Guomindang/Kuomintang (GMD or KMT for short) set up their government in Guangzhou, Southern China. Sun Yatsen was elected president in 1917. They accepted foreign aid, mostly from the USSR in the form of advisors, and Communists were also allowed into the GMD. In 1923, Chiang Kai-shek became the military advisor of the academy in Whampoa. Sun died in 1925.

The founding of the CCP

On May 4th, 1919, a student movement protesting the Treaty of Versailles was held. German ports in China were given to the Japanese, instead of being returned to China. This decision was made without consultation, and so the Chinese were just a little upset. The protest then switched its focus to western imperialism. Out of this came the rise of other political parties.

In 1921, a librarian from Beijing University called Mao Zedong, with help from Comintern agents, set up the Chinese Communist Party, the CCP for short. They cooperated with the GMD and in 1926 set up the First Northern Expedition, to oust the warlords and restore the government's power. Chiang Kai-shek led the GMD forces, and from 1926 to 1928 they fought up the country. Warlords were either killed or chose to ally with them in exchange for keeping power.

The start of the Civil War

In April 1927, Chiang ordered a series of purges on Communists in major cities, starting with Shanghai. The city had freed itself from Warlord rule through a Communist revolution, led by Zhou Enlai. When the GMD took the city, Chiang ordered anyone suspected to be a Communist to be shot on the spot. People who had red clothes were also killed, as one of the emblems of the CCP was a red scarf. These massacres quickly spread to other cities, dissolving the alliance and forcing the CCP back to the countryside. Chiang did this because he feared the CCP was becoming too powerful, and was threatening GMD power.

The CCP went to the countryside and set up a peasant republic called the Jiangxi Soviet. This was their base of power, and they gained popularity among the peasants who made up 95% of China's population. They were much more popular with the peasants than the GMD, as they treated the peasants with courtesy and promised they would get rid of the hated landlords. The CCP had already carried out land reform within the Jiangxi Soviet.

The GMD, on the other hand, set up a government based in Southern China (there were still some warlords in the north of the country). They were plagued by corruption and demanded high taxes from the peasants, many of whom defected to the CCP. Chiang set himself up as the "dictator" of the country, with a force of Blueshirts acting as the secret police. They were seen as ineefective and overly harsh.

From 1930 onward, Chiang led a series of campaigns to try and destroy the Jiangxi Soviet. The CCP managed to survive them as their popularity with the peasants meant that they had a large body of recruits and aid to draw on, and used guerilla tactics to fight back against the GMD incursions. However, on the Fourth Extermination Campaign (1933), Chiang, with help from German advisor General von Falkenhausen, tried a different strategy. This involved the use of blockhouses, forts which ringed the Jiangxi Soviet and basically besieged them. This cut off the CCP from their support, starving them out, leading to the deaths of some 60,000 soldiers and over 1 million peasants.

Faced with this, the CCP decided to make a desperate move and break out from the siege. They took all of their remaining soldiers and equipment and forced their way through a weak point in the ring of blockhouses, and embarked on the Long March.

The Long March was a pivotal moment in Chinese history. Out of the 100,000 soldiers who headed out of the Jiangxi Soviet, only 20,000 made it to the Yanan Soviet, their destination. They marched a total of 9,000 kilometres, winding around to shake off GMD soldiers on their trail. Mao led the main group, which finally numbered around 8,000 people. Other groups went to different places but they all ultimately met up at Yanan. Along the way, they spread CCP propaganda, increasing their support. The Long March secured the CCP's survival and became a sort of rallying point for the CCP, to the point where hundreds of people every year still follow the route.

The civil war (temporarily) ended in December 1936, when Zhang Xueliang, the commander of the anti-Communist forces in Xi'an rebelled and held Jiang Jieshi as hostage, urging him to cooperate with the Communists to deal with the growing threat that of the Japanese who had taken advantage of the divisions, conquering large parts of China.

Has its own article. Also, it overlaps nicely with World War Two. Interestingly, the CCP and the GMD continued to fight during the war, until they were forced to work together. The two sides forged a united front against Japan, and became part of the Allies.

The end of the Civil War

After WW 2 was over, the CCP and the GMD turned on each other almost immediately. The GMD troops, backed by America, captured the CCP headquarters but found themselves dangerously overstretched. Because of their massive peasant support, the People's Liberation Army soon numbered as many as four million. The GMD, however, was down to 1.5 million soldiers. The GMD began pulling back from the cities as they lost almost every battle, and the CCP managed to take much of their war equipment. Shanghai was the last city to be abandoned. The beaten Chiang Kai-shek retreated to the island of Taiwan, taking China's gold reserves with him. The PLA entered Beijing in January 1949 and the People's Republic of China was proclaimed.

Works set in this period (excluding the Second Sino-Japanese War):
Tropes used in No More Emperors include:
Retrieved from "https://allthetropes.org/w/index.php?title=No_More_Emperors&oldid=1680977"
Categories:
Cookies help us deliver our services. By using our services, you agree to our use of cookies.