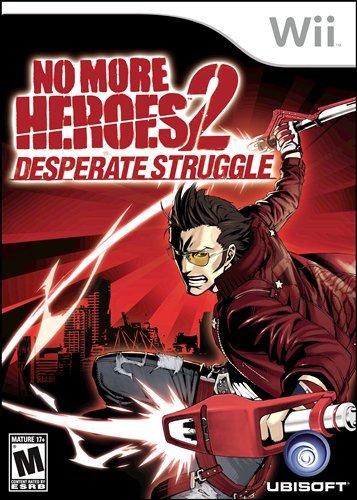 Everybody deals with grief differently, right? Some people fuck at funerals... I cut off heads.

The sequel to the surprise Wii hit No More Heroes (the bestselling game Suda 51 has made), this game was also released for that system, although allowed use of the Classic Controller in addition to using the motion control setup from the first game. It also got rid of the Wide Open Sandbox city, which was considered either one of the most boring parts of the game or an immersive experience sadly missed.

No More Heroes 2 is set three years after the events of the first game. Travis Touchdown's bloody antics have made the city of Santa Destroy famous, causing it to expand into a seedy urban hub where televised assassin fights are a popular and very profitable form of entertainment. Travis himself is retired, but leaps back into the spotlight when a gang of hired thugs murder his best friend, Bishop. His years out of action have caused him to drop substantially in rank, however, and he must fight his way to the top once again to avenge Bishop's death, this time from rank #51.

Though Travis is the primary Player Character, you play as Henry and Shinobu at specific points in the game.

Tropes used in No More Heroes 2: Desperate Struggle include:

Reaper, Reaper./ That's what people call me, why?/ Cuz they all die.

You couldn't get any stronger, Travis! Look at those muscles! More powerful than a locomotive! You know... I'd take a ride on that train...

Travis: Unleash your hate! Your anger! Everything! I'll take it all and fucking kill you with it!"