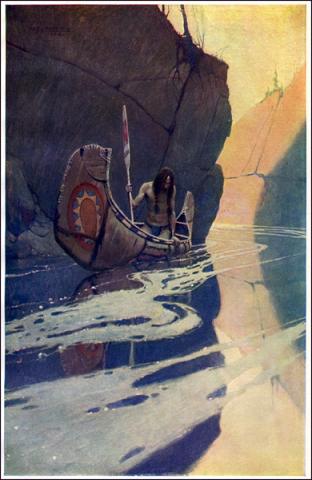 A character who is, due to their race or ethnicity, a member of a barbaric or savage tribe (or a group simply perceived as such by others), who is nevertheless portrayed as nobler or of higher moral fibre than the norm. (Often regarded as living the Good Old Ways). The savages in question are quite often American Indians, so you could probably call them Mary Sioux. Rare nowadays, except as a Sci Fi alien - though it has made something of a comeback with the idea of Magical Native American people being more in tune with nature than the greedy white people.

Older Than Feudalism—Tacitus wrote of the noble Germanic and Caledonian tribes to contrast with his view of Roman society as decadent and corrupt, and even wrote eloquent Roman-style speeches about liberty and honour for "his versions" of Calgacus and Arminius. The trope has gone in and out of fashion over time, usually contrasting a decadent distrustful "city life" that a thinker feels has tarnished the essentially good nature of humanity. In the USA, Noble Savage came into style in the mid-1800s, about the time a lot of Western states/territories got their names. This left many geographical features with names of Indian (or at least Indian-sounding) extraction.

Frequently overlaps with the Proud Warrior Race Guy. Easily leads to Unfortunate Implications, a major one being that any problems a Noble Savage faces is a problem of not living up to an idealized character rather than the simple social implications of the world they live in.

Arcadia brings in the same contrast, with a pastoral (or agricultural) society. The Noble Savage is usually of a different race than the city folks, where the Arcadians are of the same—by whatever definition of "race" is current for them.

Compare with Mary Sue, Mary Suetopia, Magic Negro. Contrast with the Corrupt Hick, Mighty Whitey (although the modern form of Mighty Whitey often co-exists with this trope) and Low Culture, High Tech. Occasionally refers to being "Of the People".

See also: Closer to Earth, Barbarian Hero, and Nature Hero. Overlaps with Nubile Savage (the character's natural ways living by wits and strength have developed his/her body in a way that a softened city dweller never can).

Examples of Noble Savage include:

Retrieved from "https://allthetropes.org/w/index.php?title=Noble_Savage&oldid=1952955"
Categories:
Cookies help us deliver our services. By using our services, you agree to our use of cookies.