Everything About Fiction You Never Wanted to Know.
(Redirected from Non Indicative Title)
Jump to navigation Jump to search 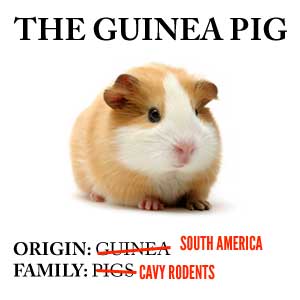 Pedants have the option of calling it the cavy, but that name will never be as cute.

Have you ever noticed how sometimes, pickles are really salty?

That's the sort of thing this article would be about if it were a Self-Demonstrating Article. But it isn't. That would be silly.

In our everyday language we tend to use words that are representative of certain objects or characteristics. On the other hand, we have words or combinations of them whose real meaning has nothing to do with their name. These are known as misnomers.

Mostly for historical reasons the misnomer sticks and nobody—or almost nobody—bats an eyelid when it is used, since it is well accepted and people know what it means. A Cloudcuckoolander character and punster tropers are likely to hang a lampshade on these from time to time, complain that contents of the tin differ from the label (or that the tin itself is not made of tin), and that there's no baby in baby food.

If the name is itself an element of deliberate deception, it may be Double-Speak or a Super Fun Happy Thing of Doom. Fluffy the Terrible, Deathbringer the Adorable, and Ironic Nickname are subtropes of this. For series with nonindicative names, see Word Salad Title and Never Trust a Title. For songs, see Non-Appearing Title. Contrary to Exactly What It Says on the Tin. See In Name Only when this trope arguably applies to the title of a derivative work.

May result from an Artifact Title.

While explanations to misnomers are welcome and encouraged, please resist the urge to make a Justifying Edit.

Examples of Non-Indicative Name include:

Most band names aren't meant to be taken literally. Please try to limit this section to names which could be legitimately misinterpreted.

Besides, early RPGs were actually simple adventure games heavy on tactical combat with no actual role-playing in the strict sense of this word. They were, and for the most part, still are devoid of elaborate dialogues and reactive world typical for the real RPGs.