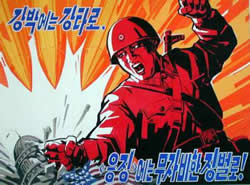 The Korean People's Army was formed from Kim Il-sung's Korean guerrillas allied with the Soviet Union (and led by the latter) in 1932. By the time of Korea's liberation from the Japanese in 1945, the guerrilla force had been transformed into a well-equipped army, to the point of enabling them to invade South Korea in 1950. Although they were beaten back by South Koreans With Marines and a United Nations force spearheaded by none other than Yanks With Tanks, the KPA eventually recovered due to intervention by the Chinese With Chopper Support and, to a lesser degree, the Reds with Rockets.

North Korea is the most militarized country in the world today; they have the fourth-largest army in the world behind China, Russia, and America, with about a fifth of its able-bodied men in the military. It has a Worker and Peasant Guard as a reserve, numbering 3 to 5 million (though they are mostly armed with bladed weapons), a huge weapons industry, and has its countryside dotted with bases of all sorts.

North Korea also developed its own weapons industry, starting with the Nodong missile (the Trope Namer), and eventually nuclear weapons, cheating the United Nations inspectors in their "peaceful" quest for nuclear energy.

Of course, Kim Jong-un is the Commander in Chief, in his capacity as Chairman of the National Defense Commission. The Korean Worker's Party also has control over the KPA to ensure that no one in the army will challenge Kim. Though technically, the Commander in Chief of the KPA is still Kim Il-sung, as he was declared "Eternal President for Life", followed by his second in command Kim Jong-il, "Eternal Chairman of the National Defence Commission". Both of these people are dead, by the way.

The KPA has approximately 1 million personnel with a mix of mechanized, armored, and artillery units. They have one of the largest collections of armored vehicles, having over twice the number of armored vehicles than its local adversaries. However, though they have numbers over the South Koreans, they still have to work with Cold War era equipment. Even though they've tried to aggressively upgrade their equipment, it's still woefully obsolete compared to the South Koreans and their American allies.

The KPA also has the largest special forces organization of any army in the world, with over 90,000 personnel. They are trained specifically to fight in North Korea's notoriously mountainous terrain.

The KPN is the lowest priority of the North Korean armed forces, and hence the least funded and advanced. Their entire navy is essentially obsolete, consisting of small, aging boats that cannot go out more than 50 nautical miles from the coast. However, these small craft do excel at covert insertions for special forces. The KPN is also known for having a large stockpile of sea mines, and it's generally assumed that they will be used liberally to fend off potential amphibious assaults. The Navy itself is divided into two separate fleets, East and West, but neither fleet is in a position to support the other.

The North Korea has been known to use the KPN to aggressively patrol its waters, especially in the contested waters near the 38th parallel, an issue that has yet to resolved. KPN ships have been known to attack and capture ships that dare venture too close, regardless of nationality.

Like the KPA and KPN, the KPAF does not lack in quantity but has serious issues with quality. The majority of their 1700 aircraft are Cold War era relics, which only roughly 400 more modern fighters acquired from Russia and China. They even have a number of biplane transports that they favor because they can be operated from short, improvised landing strips. KPAF military doctrine is mostly based off the old Soviet air doctrine, as well as their experiences with American heavy bombing during the Korean War. As a result, the KPAF is mostly concerned with air defence, mostly consisting of fighters and interceptors. However, due to changing times, it's generally thought that the KPAF has shifted their role from air defence to deterrent, threatening massive air strikes on South Korean targets should hostilities resume.

There is much debate as to whether North Korea has nukes or not, though it's hard to deny that they would very much like to. The general consensus is that North Korea currently lacks the resources and technology to create a fully functional nuclear device, though it's only a matter of time before they do.

North Korea two missiles that could potentially be used as ICBMs, the Nodong (a fitting name, all things considered) and Taepodong rockets. However, the reliability of these rockets is much debated (the Unha orbital launcher, which failed spectacularly each time it launched,[1] is almost universally considered to be a barely-modified Taepodong-2).

Heh heh...No Dongs. Now they have some Type o' Dong.