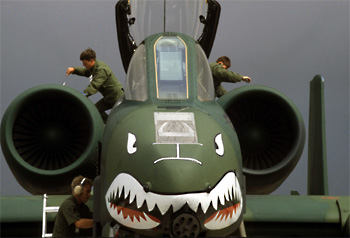 "Thanks for painting me cross-eyed, you jackwagons..."

So you have your Cool Plane and your Cool Ship, but somehow, they're still not cool enough, truly not worthy of such a Badass Ace Pilot as yourself. You know what would help? Let's paint a freaking shark face on the nose. That will get the desired reaction from your enemies. Plus, it'll look great at airshows!

Typically, you will see three varieties of this:

Type A: Distinctive artwork on the nose or tail. If on the nose, expect something akin to the classic "Shark nose" made famous during World War II. If on the tail, expect distinctive (or even flashy) designs intended to easily identify the plane's unit.

Type B: The "Pin Up Girl". Made famous in World War II, these designs often featured scantily clad women in suggestive poses. Many of these were very temporary in nature, and it was not at all rare for the pinup art to reflect the name of the aircraft (such as the famous "Memphis Belle"). This went out of style after the war, due to a variety of reasons.

Type C: Full-body flashy paintjobs: Often invoked when Rule of Cool is the primary motivator behind the paint scheme. This is common for demonstration aircraft used at air shows or VIP transports not intended to be used near the front lines. Sometimes, even camouflage can fit into this category, as some patterns designed to be very effective at a distance can look downright garish up close.

In Real Life, this trope has generally become much more subdued due to a combination of PR and practicality. Flashy artwork tended to clash with specially-designed camouflage patterns designed to help conceal the plane in combat, making such artwork Awesome but Impractical. Even the traditionally applied roundel insignia, such as the RAF's bullseye had to be replaced with subdued monochrome variants. A typical workaround with those limitations is to put the artwork in a normally-concealed place, like the inside of the wheel wells, or to simply draw it in less contrasting colors.

Since Tropes Are Flexible, this applies to other vehicles or equipment as well, as long as it fits the spirit of the trope. If the ammunition has nose art on it, then it is a Marked Bullet.

Can overlap with Ace Custom, which is when the vehicle's design, rather than it's decoration, is unique, often to give a particularly important hero (or villain) particular advantages. Nose art may display the ship or plane's name.

This is not for examples of face painting, tattoos, or artwork inspired by the human nose.

Examples of Nose Art include: