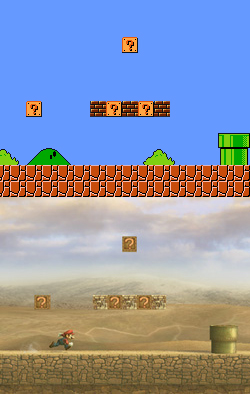 A form of Call Back in which a level or area in a video game is designed in such a way as to evoke memories of a previous game in the series. There are various ways in which this can be done: the level may simply use graphics or music from the original, or it may have the characters return to a location visited earlier in the series. In extreme cases an entire level may be reproduced exactly using updated graphics.

Also, if a game has a Level Editor, even if it has no official Nostalgia Level, you can expect fans to make plenty of remakes of iconic levels from older games in its series, and even some complete Video Game Remakes. It's a common idea when originality is a bit low.

Compare Video Game Remake, which is basically a Nostalgia Game, the Remember Me Level flavor of All the Worlds Are a Stage, where a level or section from a previous game is included among a newer game's final area's "past challenges", and Embedded Precursor where an earlier game is included in its entirety. Often brings a series' protagonist back Where It All Began.

Examples of Nostalgia Level include:

"Your Pokémon seems to be smelling a nostalgically familiar scent..."