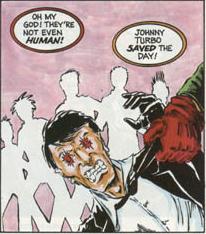 The Reveal that the Big Bad is actually not even human (or at least not anymore) but rather a monster, alien, robot, or some other manner of non-cute and thus evil and okay to kill after all.

This specific trope tends to fall into Camp territory, because usually this revelation is made without any kind of Foreshadowing or even any particular relevance to the plot- you can remove the plot twist and the rest of the story will still make sense. Like Kick the Dog, the main purpose here is to remove any doubt about whether the bad guys were really evil and killable.

This phrase actually shows up in comics a fair amount used by villains against heroes who are not technically human. Of course, from the reader's perspective they always fall on our side of What Measure Is a Non-Human?, so it just makes it seem like sadism for being willing to torture a sentient being.

In video games, this overlaps with One-Winged Angel, but only if the boss yells "Behold my true form!" beforehand.

It should go without saying, but this page is loaded with spoilers. But as mentioned above, none of these plot points are particularly relevant overall, so don't fret too much about it.

Compare Just a Machine, which deals with this trope specifically for robots. Contrast The Man Behind the Monsters, where everyone but the leader is a non-human.

Examples of Not Even Human include:

Retrieved from "https://allthetropes.org/w/index.php?title=Not_Even_Human&oldid=1517021"
Categories:
Cookies help us deliver our services. By using our services, you agree to our use of cookies.