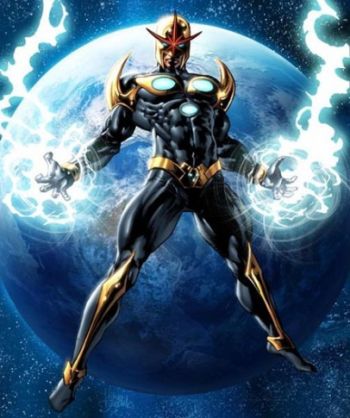 "I'm the ONLY guardian the galaxy needs!"

Richard Rider was a normal teenager, until one day he was chosen by a dying alien to carry his power, making him a member of Nova Corps – an intergalactic police force. Since then Richard has been known as Nova, The Human Rocket!

Nova is a Marvel Comics character. He first appeared in Nova vol. 1 #1 (September, 1976), created by Marv Wolfman and John Buscema, as a Homage to Stan Lee and Steve Ditko's run on Spider-Man, and to classic teenage superheroes in general. Nova's original series lasted for 25 issues (September, 1976-May, 1979), until he had to give up his powers to help Nova Corps rebuild their home planet, Xandar. Richard returned to Earth as a normal human, to lead a simple life again.

Or so he thought. Some time later Richard was approached by Night Thrasher, who proved that his powers weren't lost, only dormant...by dropping him from a building. Nova joined the New Warriors and developed a romantic relationship with his teammate, Namorita. After the New Warriors ongoing was closed, he fell into obscurity, reappearing only occasionally in solo adventures or new volumes of New Warriors.

In 2006 Richard was been brought from Comic Book Limbo for Annihilation, a Marvel big cosmic event that featured him as the central character and gave him a serious revamp – new costume, a Mentor persona in Worldmind and several additional levels in badass. Afterwards, he got a new ongoing series and was participating in various other cosmic events. He played a part in Annihilation Conquest, Secret Invasion and War of Kings and joined the Secret Avengers.

His last series endured for 36 issues (June, 2007-June, 2010). Following its end, Nova played a big role in The Thanos Imperative, where he and Star-Lord stayed in the dying Cancerverse to keep Thanos from escaping. Time will show if we will hear of him ever again.

A new Nova named Sam Alexander has appeared in the prelude to Avengers vs. X-Men, Marvel's big crossover event for 2012.

Tropes used in Nova include:

]
Retrieved from "https://allthetropes.org/w/index.php?title=Nova&oldid=1846476"
Categories:
Cookies help us deliver our services. By using our services, you agree to our use of cookies.