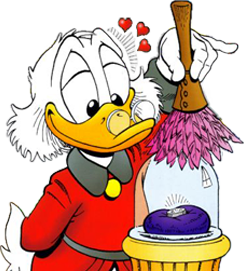 Scrooge and his First Dime.

The Number One Dime is an item that is in and of itself of little to no interest or usefulness (i.e. it is not a usable weapon), but to the character, it is ridiculously overimportant in a strictly sentimental way. It might be the token sealing a Childhood Marriage Promise, a Memento MacGuffin (particularly an Orphan's Plot Trinket or Fatal Family Photo) or a Companion Cube, but the overlap with MacGuffins at large is fairly minimal. However, hats, Nice Hat or otherwise, are frequent Number One Dimes. Expect The Chew Toy or the Butt Monkey's precious and rare Gobi Desert Cricket to be frequently threatened. If the character in question is a child, the Number One Dime will probably be a toy.

In any case, should the item be damaged or lost, it is likely to trigger a Heroic BSOD or a Roaring Rampage of Revenge, which sometimes leads to a Arson, Murder, and Jaywalking moment. If dropped, they will do an Indy Hat Roll to retrieve it. Merely being separated from the item is also likely to make them utterly distraught.

Compare and contrast with Iconic Item, which has the same meaning but is unique rather than generic, and Security Blanket, a similar concept. . If the item is "food", that's either Trademark Favorite Food or (less specifically) Obsessed with Food.

Examples of Number One Dime include:

Donald: This must be the famous Lucky Dime -- the charm Uncle Scrooge used to get his entire fortune!
Beat
Scrooge: "Lucky" dime?! What thimble-headed gherkin invented that supreme bit of absolute balderdash?!
Donald: Oh, everybody says it, unk.
Scrooge: Well, everybody is a nincompoop! I had that dime for 20 years before I struck it rich!

Spongebob: What'd you give him?
Krabs: *hops on deck, revealing that only one arm, half his torso, and his head are left* Nothing important!