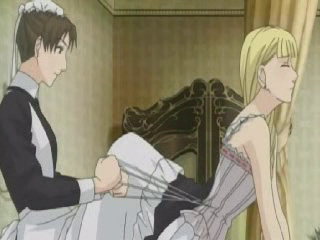 Of Corsets Sexy... but there's a price.

Pirate: "I'm gonna teach you the meaning of pain!"
Elizabeth: "You like pain? Try wearing a corset!"

—Pirates of the Caribbean: The Curse of the Black Pearl

Corsets are painful, the popular theory goes. Squeezing four or more inches from your waist? Dear god, woman, that must be torture—however will you be able to breathe? This perception has been carried into fiction: if corsetry is mentioned in a period drama, it is often in the form of a woman's complaint about the pain caused by being squeezed —usually against her will—into the garment. In more recent years, creators have taken to using the physical constriction provided by corsets as an allegory for the societal constriction women faced in the past; when a woman complains about her stays, she’s actually complaining about how she’s oppressed by society’s norms, a common complaint of the Spirited Young Lady.

The trope is Older Than Radio, as a lot of literature—some medically sound, some not—was produced in the nineteenth century regarding the dangers in corset-wearing. Nowadays, people who have worn one are split: some think it feels nice, some think it is indeed uncomfortable, and some think it hurts but enjoy that. This can be very Truth in Television - see Real Life section below.

See also Of Corsets Sexy, for a more general overview on the garment’s use, and Fashion Hurts, for other kinds of clothing-related pain.

Examples of Of Corset Hurts include:

"Get those corsets laced properly! I can hear you speak without gasping."

Gov. Swan: "What do you think ?"(of the dress, corset included)
Elizabeth: "It's *GASP difficult to say."