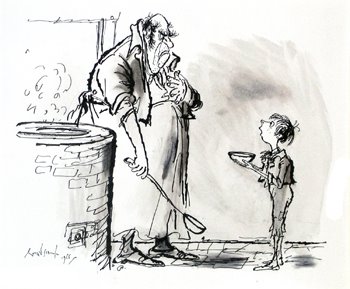 Novel by Charles Dickens, originally published as a serial in Bentley's Miscellany between 1837 and 1839. Oliver Twist is born an orphan and raised to a young age in a cruel workhouse that exploits the poor. Eventually he escapes the workhouse, only to run afoul of the London underworld. He's recruited into a pickpocket gang, but rescued by a kindly gentlemen who discovers Oliver's real identity and finally finds him a happy home.

The story is one of Dickens' most famous tales and includes some of his most enduring characters, including the crooked Jewish ringleader Fagin and the sly Artful Dodger. Like many of Dickens' works, the novel contains a great deal of social criticism on the way British society at the time treated its poor. Of particular note is the famous scene in which the starving Oliver begs for more gruel from the workhouse cook and is harshly punished.

The story has been adapted many times throughout the years, with some adaptations taking more liberties than others. One in particular, the 1960 musical version, Oliver!; the 1968 film version was successful enough to win Best Picture that year.

Tropes used in Oliver Twist include:

Adaptations with their own trope pages include:

The other adaptations contain examples of: