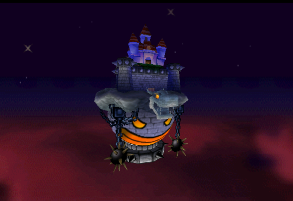 Some villains have their own country, and with a desolate volcanic wasteland around their tower that the heroes must battle their way through. Others, however, have bigger plans. Entire solar system, maybe. Alternate universe, perhaps. And right in the middle is this place, a floating castle of doom overlooking—well, pretty much nothing. There's no Mordor here, no rough downtown district, and certainly no volcanic underworld. The base floats in absolute nothingness.

On top of that, there are multiple versions with their respective associations. A Floating Continent with this place on top will often be a rather mystical area, while various space-faring series usually have an enormous battleship in the centre or edge of the universe for the alien invaders. Then, of course, anything literally in a void has a pretty good chance of being a Mind Screw. Nevertheless, it's relatively common, especially as a Very Definitely Final Dungeon in a videogame, providing the backdrop for many an extremely powerful evil force.

In general, they boil down to these three basic types:

Type 1: In a Void of Nothingness
The preserve of extremely destructive, powerful and unhinged villains, these places literally have nothing around them. Often located in an Alternate Universe, they're infinite, gloomy, and depressing places which would drive most characters completely insane. May well vanish altogether after being completed.

Type 2: Outer Space, With Nothing For Miles
The preserve of many Sci Fi or Speculative Fiction series, these are Exactly What It Says on the Tin: Floating bases somewhere in their own solar system or galaxy with nothing for miles. Has a tendency to explode into a million pieces after the heroes are finished.

Type 3: A Floating Evil Castle in the Clouds
And then there are these, often found on Floating Continents. They're just floating buildings found a few hundred (or thousand) miles high in the sky. Have a tendency to come to earth with an enormous crash once the evil inhabitant is defeated.

Examples of Ominous Floating Castle include:

Retrieved from "https://allthetropes.org/w/index.php?title=Ominous_Floating_Castle&oldid=1835011"
Categories:
Cookies help us deliver our services. By using our services, you agree to our use of cookies.