Everything About Fiction You Never Wanted to Know.
Jump to navigation Jump to search
/wiki/One Saturday Morningcreator 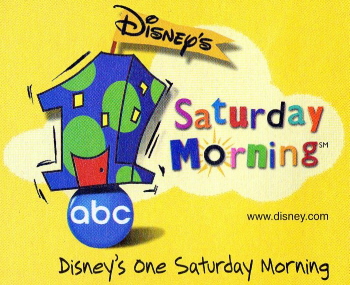 You only get one a week.

The other cartoon block of the 1990s to be created by Disney.

In 1997, The Disney Afternoon was running its last leg, and Disney had just bought out ABC. Peter Hastings, a former writer of Animaniacs and Pinky and The Brain, had just moved to them from Warner Bros. out of his frustration with the Executive Meddling happening to the latter cartoon, so he was put in charge of coming up with a new Saturday morning block for ABC. The idea he came up with (as seen in the block's intro sequence) was that the weekdays are represented as buildings, and the building for Saturday is a special one, where it is like "five hours of summer once a week", according to the theme song (ironically, most of the cartoons created for the block would tend to take place at school). It was called Disney's One Saturday Morning (the "one" being the building's address number).

One Saturday Morning was the name of not only the block, but also a hosting show-within-the-block starring a girl and an elephant as the hosts. This was where episodes of three of the block's most prominently featured shows (newcomers Recess (which quickly became the most popular show on the block) and Pepper Ann, and Disney's ReTooled version of Doug) were presented. It was also home to many interstitial segments shown between the programs, listed below. The hosts and interstitials disappeared from the block in 2000.

In spite of being filled with more E/I content than any of the other Saturday morning blocks (and pointing it out by having some guy say "Illuminating Television" over each show's intro sequence), One Saturday Morning was a very popular block, managing to stay on ABC for five years. In its third season, a companion block was added in the form of Disney's One Too, which ran on UPN (in spite of being a corporate sibling to a competitor) on both weekday afternoons and Sunday mornings. (The weekday block was originally going to be called Whomptastic, but they probably changed it to the more fitting name probably because it would not make sense to name a block after the Recess-made Unusual Euphemism for "suck".) Like The Disney Afternoon before it, One Saturday Morning also garnered its own soundtrack album of musical highlights from the shows (but confusingly, it was only released on cassette, and unlike its predecessor, it has never been made available on iTunes. Copies of this cassette are extremely rare.)

Three of its' shows became feature films: Doug's 1st Movie (originally intended for a Direct to Video release), which while doing well in the box office, bombed with critics, Recess: School's Out, which was by far the most sucessful movie based on a One Saturday Morning show, and Teacher's Pet (the only show from 2000-2003 to get a movie), which bombed in the box office and did well with critics.

One Saturday Morning aired its final broadcast on September 7, 2002, after which it was replaced by ABC Kids, which started off pretty strong, but has since degenerated into nothing but Disney Channel reruns which air with a very odd "film" effect over them (and are laughable in actual E/I content) and butchered versions of Mighty Morphin Power Rangers (and then Saban got Power Rangers back...), and that itself got the axe in Fall 2011 in favor of another new (albeit actually E/I) block called Litton's Weekend Adventure (it was supposed to be ABC Weekend Adventure, but was changed after they realized that they're not even involved in the block), run by Litton Entertainment instead of Disney, who's decided to instead use Disney Channel for their main Saturday morning cartoon block against Nickelodeon, which doesn't have to deal with FCC interference; however, Disney could have easily met the same E/I quotas with their library content. Most of the Litton shows are of the animal show variety, or have a No Budget feel, such as Culture Click, which is The Soup badly mixed with the '80s game show Chain Reaction, as Litton is infamous in syndication for their low-quality product.

Meanwhile, most of the shows featured on the block went into syndicated reruns on the Disney Channel and Toon Disney, until the latter channel having since been replaced with Disney XD. Sabrina the Animated Series was also rerun on DiC's CBS Saturday morning blocks from 2007 until early 2011. One Hundred and One Dalmatians: The Series was reran on Disney Channel, but at 4:00 AM (as part of Disney Junior (for whatever reason, as it's not a preschool show at all) for a short time in early 2011). Recess was rerun on Disney XD for a short time in October 2011. It's not the same anymore.

Apparently, Disney has not removed its site yet, and it hasn't been updated since 2003. Check it out here

Shows that ran on One Saturday Morning (and One Too):

Tropes used in One Saturday Morning include:
Retrieved from "https://allthetropes.org/w/index.php?title=One_Saturday_Morning&oldid=1775627"
Categories: