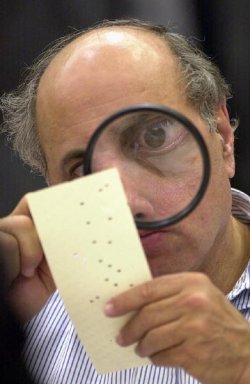 When reading a "News of the Weird" site, it has been noticed that Florida has more than its fair share of weird stories. Some of them even hang a lampshade with a "Florida" tag, as seen below.

And that's just from one day's worth of news in the Persistent Vegetative State. Quite literally one day's worth of news: All the above are summaries of Fark items from March 12, 2008. Don't get us started on the 2000 Presidential election either. This may be one of the causes of Florida's current population loss- in 2008, for the first time in over a century, more people moved out than moved in. Considering that development and housing construction are such a major sector that the state's entire economy has been described as a giant Ponzi scheme, that's a problem.

Prior to the paper folding, the Weekly World News was based in South Florida.

A lot of talented writers (Dave Barry, Carl Hiaasen) work for newspapers in Florida, which is perhaps why so much is known about the state's quirks. The state has a number of excellent newspapers, largely the result of its strong sunshine (read: transparency in government) laws.

Often used negatively as a No True Scotsman fallacy, in which someone says something negative "can only be done in Florida", regardless if any other part of the country or the world can or has been subjected to it.

It is to their credit that most Floridians laugh along with this sort of "joke", mainly because they know that, on the whole, the Only in Florida "trope" is based on complete and utter nonsense created by comedians skimming a list of the most extreme events from an otherwise normal, run-of-the-mill newsday and presenting them as if this sort of stuff was the norm rather than the exception.

Examples of Only in Florida include:

People who remark about the unusually large quantity of weird news stories coming out of Florida:

Examples of particularly odd cases of this trope in action in Real Life include: