Or Are You Just Happy to See Me? 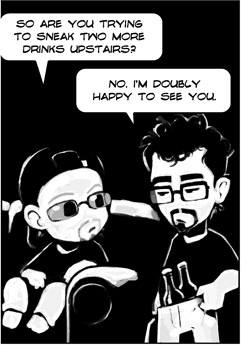 Bob is a private detective. He's sitting in his office and waiting to meet his client, Alice. Bob has never met Alice in person before; he's only spoken to her on the phone. He has seen a picture of her before and, well, he ...likes what he sees. The door to his office opens and he stands up. In walks Alice. Alice is extremely beautiful in a Gaussian Girl or Hello, Nurse! sort of way. Bob tries to keep his excitement down at meeting this gorgeous woman and tries to remain all business. Alice, however, is all too aware of the sort of the effect she has on men. Noticing the look on Bob's face... and Bob's pants, she offers a sweet, sultry smile, and says, "Why detective, is that a gun in your pocket or are you just happy to see me?"

A clever line originating from early Hollywood sex symbol Mae West, has now become a stock innuendo uttered by flirty women (or, occasionally, men). It's been said so much in media that it is kind of a Discredited Trope as it is almost always subverted these days. Namely, it almost always is something else in his pants.

While the specific line just happens to be from Mae West, this one is arguably Older Than Feudalism:

See also Something Else Also Rises, Double Entendre, That's What She Said.

Examples of Or Are You Just Happy to See Me? include:

Retrieved from "https://allthetropes.org/w/index.php?title=Or_Are_You_Just_Happy_to_See_Me%3F&oldid=1875531"
Categories:
Cookies help us deliver our services. By using our services, you agree to our use of cookies.