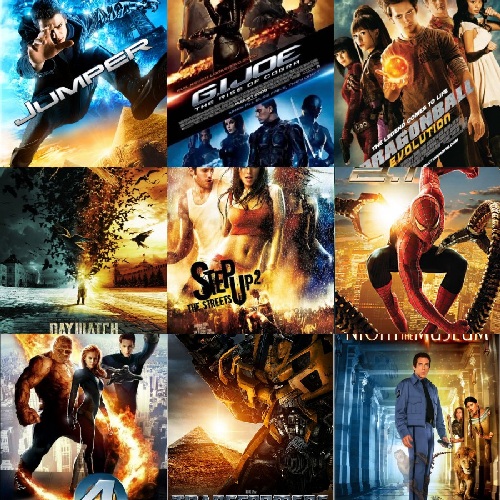 And these are just the posters!

Basic complementary color theory states that when two contrasting colors are put together, they "pop", so the natural technique is to color films to have a strong, contrasting palette.

The one thing you will almost always have in a film is people. Human skin runs from pale pinkish yellow to dark brown, all of which are shades of orange. The color that contrasts best with orange is blue.

So you just turn up the shadows to the teal end, the highlights to the orange.

Unlike other pairs of complementary colors, fiery orange and cool blue are strongly associated with opposing concepts—fire and ice, land and sea, day and night, invested humanism vs. elegant indifference, good old fashioned explosions vs. futuristic science stuff. It's a trope because it's used on purpose, and it does something.

More here, here and here. Games have (relatively) recently also picked up on this trend, and you can find some of the worst offenders on this Tumblr.

Subtrope of Mood Lighting and sister trope to Unnaturally Blue Lighting, as well a very specific and common form of Color Contrast and Color Wash. Not to be confused with Blue and Orange Morality (even when it overlaps with Good Colors, Evil Colors, as in Tron: Legacy). Ties in with Hollywood Darkness, which is usually blue or teal.

Has a vague resemblance to the Loudness War; in both cases, something is pushed Up to Eleven in post-production, removing all subtlety from the sound or picture. Can be a factor in Digital Destruction.

Examples of Orange-Blue Contrast include:

Retrieved from "https://allthetropes.org/w/index.php?title=Orange-Blue_Contrast&oldid=1948969"
Categories:
Cookies help us deliver our services. By using our services, you agree to our use of cookies.