Everything About Fiction You Never Wanted to Know.
(Redirected from Oriko Magica)
Jump to navigation Jump to search 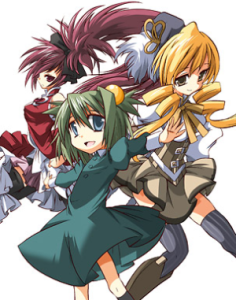 "Who in the world is this young girl standing before Mami and Kyoko...?"[1]

Puella Magi Oriko Magica is a manga Spin-Off of Puella Magi Madoka Magica, released shortly after the anime's conclusion. It is written from a draft by the creators of Madoka Magica and is illustrated by Mura Kuroe. Unusually, it was released as a series of trade paperbacks/tankobon instead of being serialized in a magazine, similar to the manga adaptation of Madoka Magica.

Oriko Mikuni, a new Magical Girl, sees a vision where a powerful witch attacks Mitakihara City. As she realizes that she is unable to fight the witch herself, she receives another vision of a little girl. She quickly tells Kyubey that this girl is a very good magical girl candidate.

Elsewhere and elsewhen, Kyoko Sakura fights a witch in a new city. At the end of the battle, she finds a little girl, who was orphaned when her parents were killed by the witch. This girl, Yuma Chitose, is the same girl Oriko saw in her vision. In a rare moment of compassion, Kyoko decides to look out for Yuma, though she is adamant that Yuma should not become a magical girl.

And so the stories of these girls, as well as those of Mami, Homura, and Madoka, converge...

A bonus chapter entitled Noisy Citrine will be released in the second issue of Manga Time Kirara Magica, the official Madoka Magica magazine.

Late Arrival Spoiler Warning: Puella Magi Oriko Magica was released after the conclusion of the anime. It is expected that the reader will have watched the anime first. This page will have marked and unmarked spoilers for Puella Magi Madoka Magica, which will ruin your enjoyment of it if you have not seen it already. This is in addition to the spoilers this page will have for Oriko Magica itself. Avoiding this page is highly recommended for those who have not seen the show, and is highly suggested for those who have seen the show but have not yet read this manga. YOU HAVE BEEN WARNED.

Tropes used in Puella Magi Oriko Magica include:
Retrieved from "https://allthetropes.org/w/index.php?title=Puella_Magi_Oriko_Magica&oldid=1763661"
Categories:
Cookies help us deliver our services. By using our services, you agree to our use of cookies.