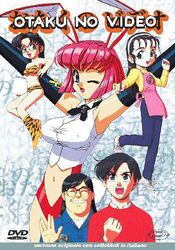 Legendary early Gainax feature telling the story of Kubo, a college student in 1982 who is drawn into a group of rabid, obssessed anime fans ("Otaku") by his old high school buddy Tanaka. He eventually becomes just as obsessed as the others, and sets his sights on becoming the ultimate fan of all -- the OtaKing!

Despite the rather warped-sounding premise, this is actually a youth drama, which ends with what is either a world-changing epiphany or an uplifting Dream Sequence. Interspersed among the animated footage is a live-action "documentary", Portrait of an Otaku, which showcases several extreme examples of the type in excruciating detail.

The animation is high-quality, and the sharp-eyed fan can spot literally dozens, maybe hundreds, of references to almost every pre-1980s anime, with a handful of early 80s shows. Despite the occasional tongue-in-cheek approach, the story is surprisingly serious, and many believe that it is a fictionalized autobiography of the key members of Gainax.

As an aside here, American anime fans call themselves "otaku" as a perverse mark of pride, and many of them are under the impression that it means "enthusiast". Not quite. Because of the obsessive nature of otaku and some heavily publicized news reports, in Japan, the word is often used in an extremely insulting way (bordering on obscenity). Many think of "otaku" as someone who's not simply so obsessed with something that he refuses to leave his home, but someone who's mentally ill. By contrast, the American usage is little more than a synonym for "Geek".

However, this has been reversing itself in the past few years; see Densha Otoko. Otaku no Video shows both sides, but in the end, comes down on the side of otaku pride.

Either way, be advised that calling yourself an "otaku" in front of Japanese people is likely to result in spit-takes or worse.

Otaku no Video is the Trope Namer for:
Tropes used in Otaku no Video include:
Retrieved from "https://allthetropes.org/w/index.php?title=Otaku_no_Video&oldid=1840648"
Categories: