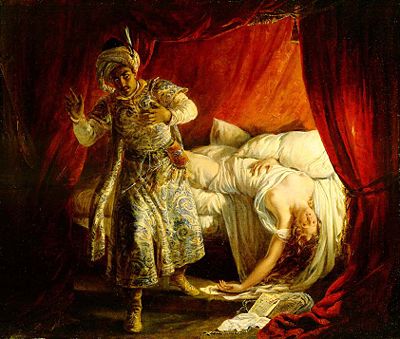 Othello and Desdemona, after taking a stab at some pillow-talk.

Othello, The Moor Of Venice is one of William Shakespeare's most famous plays. Adapted at least ten times for the screen (sometimes with setting changes), it is a play about racism (though not as we understand it today), trust, love, betrayal and smothering someone with a pillow because you think she's cheated on you, then killing yourself when you realize she didn't.

One thing that must be said is that the play is, along with a lot of contemporary works, far harsher in hindsight. It was written over two centuries before the scientific classification of races and the development of racial hierarchies and stereotypes as we understand them today, albeit they in in modified forms. 'Race' is by no means a static, universal concept. That's not to say people didn't look down on people who weren't from their village, or their county, but peoples' worlds were much smaller back then, and stereotyping and discrimination were in all probability a local or inter-county thing at the time.

It's worth noting that in times past, it was usual for white actors to play Othello by way of Blackface, up to and past the 1960's. In fact, the first time a black actor played the part in a major stage production with an otherwise white cast wasn't until 1943. Thus, the early Othello movies have a White Male Lead Othello. It is a case of post-facto Values Dissonance, but it does not make such portrayals inherently bad. As a Christian Moor, or part-Moor, Othello would likely have been some sort of shade of brown - we don't really know for sure - but in his most recent portrayals he has been portrayed by very dark actors, and the 'racism' angle - often using racial stereotypes as understood in the modern USA - has been played up considerably. What slaves there were in the 16th Century Mediterranean were Slavic peoples (Slavic being the adjective form of Slav, which comes from 'Slave') from eastern Europe, and if anyone was doing the slaving, it was probably an Italian or a Turk. Racial characterisation of black people as inferior, the way we understand racism against blacks today, was a post-facto justification of sorts for the trans-Atlantic slave trade when it got going in earnest over a century later.

Tropes used in Othello include:
Retrieved from "https://allthetropes.org/w/index.php?title=Othello&oldid=1468293"
Categories:
Cookies help us deliver our services. By using our services, you agree to our use of cookies.