Other Me Annoys Me 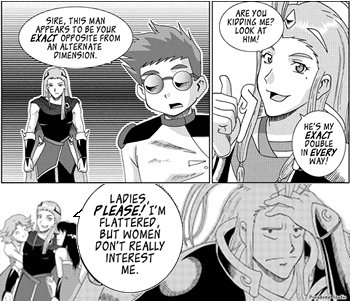 Not only more popular with the ladies, but better at being evil.

A character encounters an "alternate" version of themselves that they greatly dislike. The alternate can be a work of fiction existing only on a written page or Show Within a Show, or a Doppelganger of some sort (Clone, Time Travel, Alternate Universe, etc). The alternate version may be a thinly veiled caricature that exaggerates negative qualities or emphasizes neutral or even positive traits in ways the original dislikes, or invents traits whole cloth that are highly out of character. The original is likely to become very angry at the author or the alternate for the real (or perceived) insult.

The "original" may find that For Want of a Nail their alternate version is really annoying, and (if not a fictional creation) the alternate may likewise find the original embarrassing. On the other hand, the alternate may be a much more successful or well developed individual who angers the original by outshining them. Expect at least one of them to say "I Resemble That Remark" and/or "Why didn't anyone tell me this makes me look fat?"

Compare Future Me Scares Me and I Hate Past Me.

Examples of Other Me Annoys Me include: