Our Lawyers Advised This Trope 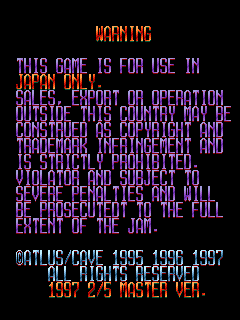 A typical screen when an arcade game boots up. (Except for the part about jam, which is probably meant to say "law".)

In the interests of full disclosure, we are describing Our Lawyers Advised This Trope here.

Pursuant to the avoidance of unnecessary civil and criminal litigation, a variety of disclaimers, notices, and even changes to the actual work, are present in modern fiction, usually in the packaging of said works, before the beginning if applicable, or during the opening or ending credits if applicable.

These may be mandated with threats of legal actions by government bodies or could be attempts by the well advised creators to reduce their vulnerability to civil litigation from civilian citizens. Please note that these threats may or may not be actually true, considering the number of people who do exactly the opposite of this disclaimer and still roam the streets at night, but we are heavily implying that you follow them anyway.

Parodies of the trope may, or may not, have some overlap with Suspiciously Specific Denial.

See separate document, heretofore referred to as a Sub-Trope, called This Is a Work of Fiction, for instances relating to said notice.

Our lawyers recommend you see also Content Warnings, No Animals Were Harmed, Side Effects Include.

Examples of Our Lawyers Advised This Trope include:

Below are, to the degree and/or extent which is so far known to us, et alii our lawyers, Straight Examples:

In the name of the 'All The Tropes Ltd.' Legal Department, we like to recall that the items contained in the following section are Not Straight Examples of the page's topic, or anything resembling it:

Last not least, our Legal Dept. might like to inform you, that none of the promises, regulations or compilations of tropes of any kind, that were mentioned above, are valid, or should be taken seriously. We would like to apologize in advance for any errors and serious complications, regarding property, health, or sanity.

Retrieved from "https://allthetropes.org/w/index.php?title=Our_Lawyers_Advised_This_Trope&oldid=1865068"
Categories:
Cookies help us deliver our services. By using our services, you agree to our use of cookies.