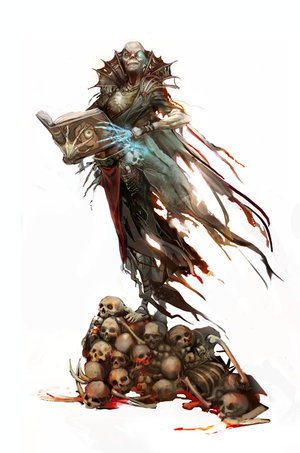 Even a dead guy can make it in the world if he's got himself a college education!

A lich is an undead sorcerer, often one who seeks Immortality or power above anything else, and became undead as the price he had to pay. Typically his soul is stored elsewhere in a Soul Jar, at times called a phylactery, which must be destroyed before he can be fully defeated. In other fiction, the Soul Jar is optional.

A lich's physical appearance can range from near-normal, to zombie/corpse-like, to completely skeletal, which usually depends on the lich's age. Because of their skill at magic, liches tend to be the most powerful and dangerous type of undead in settings where they exist.

Something resembling the concept goes at least back to Koschei the Deathless from Russian Mythology and Tales. He was a gaunt, skeletal villain whose "death" was hidden in a needle inside an egg. To kill him without him coming Back from the Dead, one must destroy the needle. He was also an Evil Overlord, a powerful sorceror and a great fighter. Basically, the only thing that distinguishes him from a lich is that he is very good at using his BFS.

The word "lich" is an old word for "corpse" (in modern and slightly-archaic English, graveyards are still occasionally called "lichyards" and "lichfields") and was used in reference to (sometimes undead) corpses by Clark Ashton Smith in the 1930s. Dungeons & Dragons, inspired by this, used the word specifically to mean an undead sorcerer with his soul stored away. The influence of D&D on fantasy literature and on Video Games has spread the term to some degree, although it's still not a standard term and there are plenty of undead sorcerers in media that are never called liches. (Equally, there are cases where the creature is called a lich but is just a walking corpse, if the author thinks that "zombie" sounds anachronistic or inaccurate.)

It's pronounced to rhyme with "witch".

Examples of Our Liches Are Different include:

Retrieved from "https://allthetropes.org/w/index.php?title=Our_Liches_Are_Different&oldid=1966152"
Categories:
Cookies help us deliver our services. By using our services, you agree to our use of cookies.