Out of Jimmy's Head 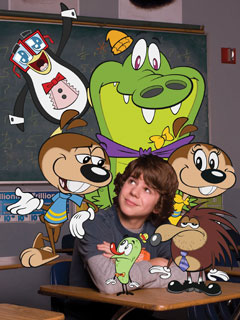 Yes, just look at that hair.

Following the success of Cartoon Network's two-hour live-action/animation original Made for TV Movie Re-Animated comes Out of Jimmy's Head. The story continues directly from the film with Jimmy Roberts, who's received a brain transplant after a train collision at the famous Gollyworld theme park (and somehow is not only fully functional, but has grown back his long, shaggy hair almost immediately thereafter). Jimmy ends up receiving the frozen brain of famous cartoonist Walt Disney Milt Appleday, which leads to Jimmy being able to see all of Milt's cartoon characters in the real world - Mickey Mouse Golly Gopher, his girlfriend Minnie Mouse Dolly Gopher, Goofy Crocco, Donald Duck Tux the Penguin and Tom and Jerry Pickles and Prickles. Milt's son and dastardly evil resident villain, Sonny Appleday, wants his father's brain so he can create cartoons like his father.

Jimmy's family have allowed Sonny to take up residence under the impression that he's a college student, so now he plots effortlessly to nab Jimmy's brain with a bunch of "evil" schemes. The family itself consists of a middle school principal for a dad, an astronaut for a mother, and an alien sister. Jimmy is best friends with Craig, who effortlessly tries to be part of the cool crowd, and crushes on his best friend's sister Robin, an obedient overachiever.

The series itself has lasted for only two seasons and people believe it was due to The Writer's Strike of 2007 but all of the episodes were finished by then. Also, they only wanted to make twenty episodes of the series in the first place. Ratings and critical reception of the show were mediocre, partly due to viewers being skeptical of having live action shows on an animation channel, among other things. Despite this, the show may have influenced Cartoon Network to gain more live-action shows like Level Up.