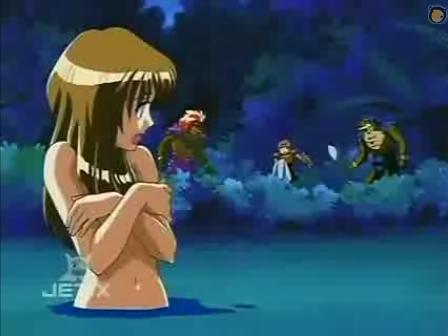 And it came to pass at eventide, that David arose from off his bed, and walked upon the roof of the king's house; and from the roof he saw a woman bathing; and the woman was very beautiful to look upon.
—The Bible, "2 Samuel 11:2"

Lacking any modern arrangement while living or traveling in the wild, or just roughing out, a woman is taking a bath in a natural body of water (sea, river, lake, pond, waterfall...) in the outdoors.

Inevitably, a man is going to stumble on her while she is naked. If not spotted, even the most chivalrous men will have a hard time looking away. Truth in Television. If spotted, expect lots of yelling, Armor-Piercing Slap or Megaton Punch. Or maybe not, if the story is on the naughty side... then the guy might actually get lucky.

More often than not, this is entirely accidental from the male, who didn't plan any peeping. Sometimes they'd be attracted by the woman yelling and be rushing to the rescue. If the reason of the yelling is serious, like a water monster attacking, the man can eventually be forgiven his indiscretion. Or maybe they wanted a bath too and what an amazing coincidence that their hot female companion is ass-naked in the very pool they were headed for...

It stands to reason that outdoor bathing runs more risk of being peeped upon than in the safety of a bathroom; however, with this trope in action, it's like the mere act of disrobing in the wild for washing up acts like a magnet to most males in a thirty mile radius.

If it's the first time they met, may result in Naked First Impression, and eventually Naked on Arrival. Mostly done for Fan Service and ship teasing. As shown by the mythological examples below, this is Older Than Feudalism.

Generally distinct from whatever is going on in an Onsen Episode, since there the hot pools are known to be popular bathing spots, and thus any peeping is generally quite intentional.

Characters who intentionally try to peep in this fashion may be The Peeping Tom.

Often reminds women that they Can't Bathe Without a Weapon. May result in Gone Swimming, Clothes Stolen. A common hazard of Drum Bathing.

Examples of Outdoor Bath Peeping include:

Vangerdahast: And you may consider yourself lucky to escape with a dunking. Spying on a royal princess's bath could be deemed a crime against the crown.
Rowen: I wasn't spying!
Vangerdahast: No? Just peeping?
Tanalasta: Vangerdahast! You owe Rowen an apology. I asked him to keep watch while I bathed.
Vangerdahast: I doubt you asked him to watch you. (glowering in Rowen's direction) Had you been guarding the princess instead of leering at her, you would have heard me coming.

Richard: Kahlan, about what happened back, (points at river) I didn't see anything.
Kahlan: Richard, you should never lie to a Confessor.
Richard: (misses a step)

"I took compulsive skinny dipper. Seemed like an OK idea back home... no river for miles."