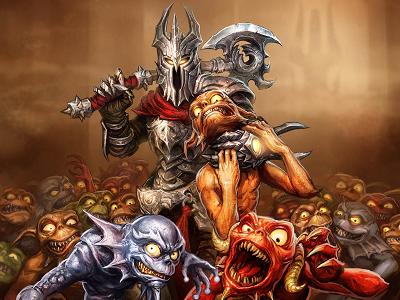 As you can see, being Overlord to such a band of minions requires a kind and gentle touch.

Once again, it's time to put on your (evil-looking and spiky) villain-hat... as might be suggested from the name, Overlord is a series that lets you step into the flower-stomping, minion-kicking, heavily-armored shoes of an Evil Overlord. With such a premise, it can hardly come as a surprise that the games use or subvert half the entries in the Evil Tropes index...

Due to the series' playstyle, it's often seen as a Darker and Edgier Medieval Pikmin, though they don't clash as much as you would think.

Games in the series include:

A character sheet is under construction and needs entries.

Tropes used in Overlord (series) include:

Gnarl: Oh great, a Labyrinth. Sire, if you see any goblins or rosy-cheeked maiden, just ignore them, if there's singing, kill them all.