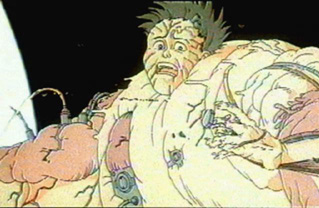 Don't worry Tetsuo, it's worth it. Apparently.

Usually, Shapeshifting is done quickly and without undue damage to the shifter. For whatever reason, the body flows from one form to the other without much trouble. But that isn't always the case. Sometimes, those who would take on another form are going to suffer for it.

As the name implies, a Painful Transformation is agonizing. While it may not leave permanent injuries, it's still not pretty.

There are generally two ways transforming can be painful:

Usually not associated with Voluntary Shapeshifting, where the user generally knows enough to pick a quick and painless method of transformation. Involuntary Shapeshifters and (especially) Baleful Polymorphs, on the other hand....

In cases where the shapeshifter will, once fully transformed, pose a threat to all others present, no one takes advantage of their temporary incapacitation in an attempt to flee or subdue them.

Examples of Painful Transformation include:

Retrieved from "https://allthetropes.org/w/index.php?title=Painful_Transformation&oldid=1854585"
Categories:
Cookies help us deliver our services. By using our services, you agree to our use of cookies.