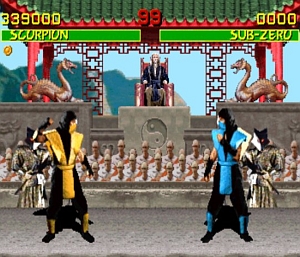 And that's not even counting Reptile, Smoke, Ermac, Rain, Noob...

In 2D game development, the creation of sprites is a labor-intensive task; moreso if the sprites are animated. One cost-effective method for increasing the variety of game characters is to reuse the same sprite, but using a different color palette.

This is seen in some platformers, but it most often appears in Role-Playing Games and Fighting Games. In fighting games, this is commonly used to differentiate players using the same character, but it is also employed to create "new" characters. In the 8- and 16-bit era RPGs, it was pervasive: because of console limitations, disk and screen space were serious concerns. Palette Swapping was used to create a large variety of different enemies, often using different colors for various power levels. (The most famous group of these are probably the Slimes, topped by the powerful Metal Slime, of Dragon Quest fame.)

In 3D game development, however, changing only the colors has mostly died off, but there are similar variations. Because animation is no longer tied directly to models, it is much easier to create new models and textures for a character while still using the same animation set. Clever code can even allow you to use differently sized characters with the same animations. However, this was not new to 3D: On the SNES, some RPGs were able to use the foreground and background layers to put something in front of the tiles, changing the appearance of the original monster "sprite",[1] making this aversion Older Than They Think.

Not even modern games are entirely immune to this primarily 2D game pitfall, however. Massively Multiplayer Online Roleplaying Games MMORPGs are often set in a very large world that must be populated by monsters. Palette Swap to the rescue! By changing the size and textures used on the same model, the designers can make many types of monsters from only a few basic meshes. Sometimes even bosses are simply re-textured and huge versions of weaker monsters.

Some fans of fighting games use the term to refer to characters that use the same animations and move sets, even if the characters look very different. Individual characters may also have a choice of several different colors or costumes (or both).

Color-Coded Multiplayer is a Sub-Trope, applied to player characters. When the head (or any other body part) is changed as well, then it's more accurately a Head Swap. Color-Coded Armies may also show up in 2D games. For a similar time-saving technique, see Ambidextrous Sprite.

See also Color-Coded for Your Convenience. This trope is used in part to create Copy and Paste Environments, Ditto Fighter, and Underground Monkeys. Only Six Faces is a related animation version. Though the visual effect may be similar, this trope is not related to Adaptation Dye Job.

Examples of Palette Swap include:

Also interestingly enough, a player using the Mission Architect can actually palette swap preexisting enemies! Even AVs! And, of course, due to the game's customization system, the vast majority of models use one of three basic animation sets anyway.

Also the civilian populace, where any given civilian model has a few color themes affecting attire and skin.

Retrieved from "https://allthetropes.org/w/index.php?title=Palette_Swap&oldid=1835534"
Categories:
Cookies help us deliver our services. By using our services, you agree to our use of cookies.