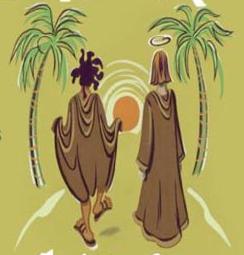 Jesus with his best bud, Biff.

Data: Q's interest in you has always been very similar to that of a master and his beloved pet.
Picard: [Death Glare


Data: It was merely an analogy.
—Star Trek: The Next Generation, "All Good Things"

Maybe you live in a Fantasy Kitchen Sink. Perhaps you're the proud resident of a world with a Crossover Cosmology. Whatever the case, you need to put the kettle on the boil and biscuits on the tray because your pal Jesus is coming over for tea in twenty minutes.

This trope is about the tendency of fantastic fiction and ancient myth to have completely mundane mortals (often of the heroic variety) be on a First-Name Basis with the movers and shakers of the universe. The reasons vary: maybe the god, Anthropomorphic Personification, or (surprisingly personable) Eldritch Abomination have taken a liking to the character for their own reasons. Maybe their portfolios coincide a great deal, so they share the same interests. Or maybe the god just wants to chill out with someone who's not depressed due to Time Dissonance and isn't another of their vainglorious "equals". Then again, if your hero is actively fighting Dracula and his minion The Grim Reaper across several games, it's only natural they get to get friendly after a while.

Whatever the case, the character has a direct line to the Powers That Be.

Though not limited exclusively to these types of characters, the following tend to attract deific attention most often: The Unfazed Everyman, Strange Girl, and Weirdness Magnet.

Compare God Was My Co-Pilot, where this is used as The Reveal, and Reasoning with God, where higher powers can be talked to but only on extraordinary occasions. See also Did We Just Have Tea with Cthulhu?, Olympus Mons, and Enemies with Death. If they get involved in the characters life, may become a Sidekick Ex Machina or Monster Roommate. Contrast Egocentrically Religious for conceited characters who believe themselves to be pals with Jesus.

Examples of Pals with Jesus include:

"Since when are you on a First-Name Basis with the Wise One?"

Hawkgirl: That's right, I'm an angel. You can mess with me if you want to but I don't think you want to mess with The Boss.
The Demons fly away scared
Hawkgirl: If we're lucky, they'll all be that dumb.