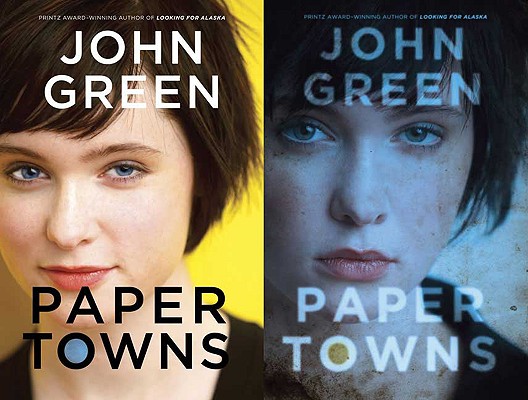 The double cover for the novel- The reason given for the multiple covers is that the main theme of the book is how nobody truly knows anyone, and both images are ways in which people misinterpret Margo Roth Spiegelman.

My miracle was that I ended up living next to Margo Roth Spiegelman.
—Quentin 'Q' Jacobsen

High school senior Quentin Jacobsen (known to his friends as "Q") has been in love with his neighbor, the mysterious, beautiful, and adventuresome Margo Roth Spiegelman for as long as he can remember. So when one night she appears at his window to ask for his help in playing revenge pranks, he can't refuse. The two travel to Margo's ex-friend Becca's house, where Margo's boyfriend is cheating on her, along with her boyfriend's house, the house of an old bully, and Sea World, where Margo and Q dance together to an old song playing on the loudspeaker. At the end of the night, Margo leaves Q with a hug and says "I. Will. Miss. Hanging. Out. With. You."

The next day at school, Q is hardly surprised that Margo isn't there. But when no one sees her for days, Q and his friends Radar and Ben begin searching for the clues Margo had apparently left for Q, including a poster of Woody Guthrie on her window, parts of the poem "Song of Myself" by Walt Whitman, and an abandoned mini-mall where she wrote stories from her childhood and explored, with the help of Margo's best friend, Lacey. Using these clues, they must attempt to find the riddle wrapped in an enigma that is Margo Roth Spiegelman.

Tropes used in Paper Towns include:
Retrieved from "https://allthetropes.org/w/index.php?title=Paper_Towns&oldid=1763446"
Categories: