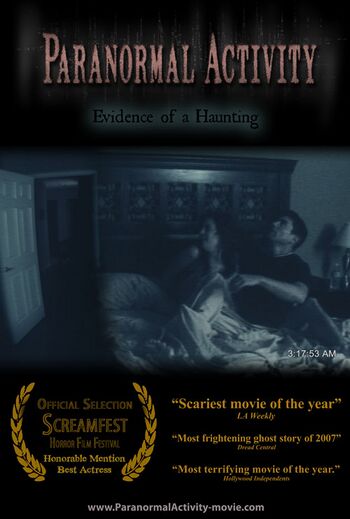 Paranormal Activity is an indie horror film about a woman, Katie, who's had to deal with the unfathomable and terrifying caprices of a supernatural entity -- a shadow at the foot of her bed, lights flickering, banging on walls -- for most of her life. Her boyfriend, Micah, decides to buy a high-end video one day to film the house at night in order to find an explanation for these phenomena and making some money out of the tape. But then crap gets real.

The film was shot in a week on $15,000 and premiered at festivals in 2007. With the blessing of Steven Spielberg himself, it saw limited release in theaters in September 2009; after an effective marketing campaign that asked people to demand that the film be released nationwide (to the number of a million requests -- a number which was reached in less than a week), the film saw a nationwide release on October 16th, 2009.

A sequel was released on October 22nd, 2010, rivaling with the seventh chapter of the Saw saga, which is interesting given that the director of that Saw installment wanted to direct Paranormal Activity 2.

A third film, taking place in the late 80s during Katie's and Kristi's childhood, was released on October 21st, 2011.

A fourth film, Paranormal Activity 4, was released in 2012.

This page contains spoilers and tropes for all three films!

The following tropes are common to many or all entries in the Paranormal Activity franchise.
For tropes specific to individual installments, visit their respective work pages.