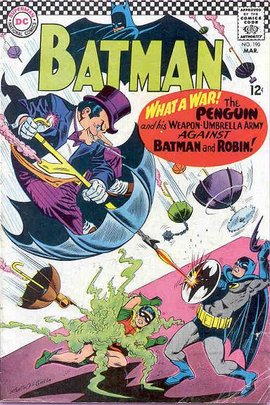 I threaten you with an umbrella with a poison tip.
—The House Detective by Fionn Regan

A good fighter can take anything and be able to use it as a weapon. Swords, guns, boomerangs, chainsaws, and even...an umbrella?

Yes, despite their standard use as protectors from rain, snow and sunlight, a parasol can be a deadly weapon in the hands of any fictional character, if used the right way. In this case, they're mainly used for clubbing people to death, but some varieties of umbrellas can shoot things - from bullets to gas to laser beams. Don't be fooled if you see an old lady wielding an umbrella. Get on her bad side, and she'll whack you good!

It's a pretty versatile "weapon", too. Opening the parasol often lets it serve as a shield against attacks, even though most Real Life umbrellas aren't that durable, though some works imply or outright say the parasol is made of metal. It can even, in a pinch, serve as a parachute. Running Razor Floss along the rim of the canopy turns the parasol into a razor-edged shield.

And if all else fails, you can always just hide a sword in it.

Compare Parasol of Prettiness, Kicking Ass in All Her Finery.

Examples of Parasol of Pain include:

Cole: Lady Ascha encourages you to attempt evading "this".