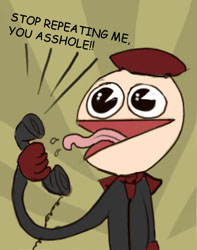 I'm supposed to stop repeating after you, huh?

So, you're told something of great importance, something that is either too incredible to believe or part of some larger thing that you don't know about. The typical response to this is What Is Going On?, or Let Me Get This Straight.... Unfortunately, there's a problem with this scenario in media: more often than not, the viewer has about as much of a clue as to what's happening as the character being fed the information, and as we all know, Exposition is key in making media understandable and watchable. So, expect this trope to be used over and over and over again in nearly every conversation, as the informee is given the Idiot Ball for the sake of explaining everything to the viewers. Do it too often, and the informee begins to act like they can't go two steps without requiring Mr. Exposition to come in and point out the glaringly obvious. Combine well with Dull Surprise to get a character that really looks out of it and perpetually clueless.

Truth in Television, especially in the form quoted above. Sometimes you just want a bit more detail. Worth noting that Japanese, the language that many examples are translated from, does this a lot as a mechanic of the conversational language.

Often done by The Watson. Compare Repeating So the Audience Can Hear, for when we can't hear the other side of the conversation, and Parrot Expowhat, where the exposition is so shocking, Sesquipedalian Loquaciousness, or obscure that the other party can't repeat it.

Retrieved from "https://allthetropes.org/w/index.php?title=Parrot_Exposition&oldid=1861092"
Categories:
Cookies help us deliver our services. By using our services, you agree to our use of cookies.