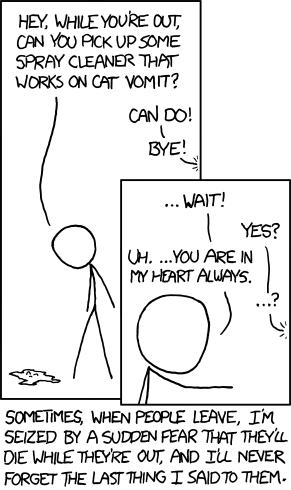 Why was I always such a brat? Why did I always fight her? And I never said 'I love you!' Now I'll never get to! Never!
—Eren, Attack on Titan (English Dub)

A character has been Killed Off for Real. One of the survivors recalls the last conversation they had with the deceased, and wishes they had chosen their words more carefully. Maybe they said something hurtful, perhaps even wishing them harm and never got a chance to take it back. Maybe the conversation was about something mundane and trivial, and they wasted to opportunity to express their true feelings to the person. Whatever the case, they look back on the incident with regret.

Sometimes inverted where the dying person feels the regret. Related to Never Got to Say Goodbye and I Wished You Were Dead.

Examples of Parting Words Regret include:

"I can't help thinking about...the last thing I said to him. He tried to tell me something important, and I threw it in his face."

Norman Osborn: I've been like a father to you... be a son to me now.
Peter: I have a father. His name was Ben Parker.

Homer:"Yeah, you probably should have said something romantic, like 'I love you'"

"I yelled at him, Mom. He grounded me and I wouldn't listen. The things I said--!"