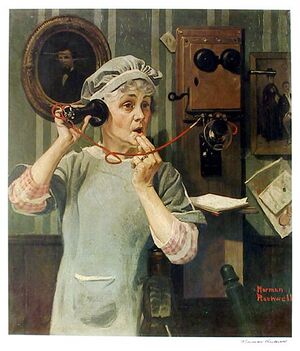 The bane of rural telephony for about a century from the late 1800's onward, the party line telephone is a low-cost but inferior grade of landline service on which a telephone company has connected multiple subscribers to the same physical line. More Tin Can Telephone than Shoe Phone, these "shared service lines" were a common (but annoying) fixture on every rural road, in every college dormitory and maybe in more than a few rapidly-growing 1940s or 1950s outer suburbs in the early years in which many of them still had well water, septic tanks and rural-style infrastructure.

Picking up the handset when a neighbour is making or taking a call gives not a dial tone but an opportunity to hear both sides of their conversation. Drop What You Are Doing without hanging up properly first, and you've tied up the entire line for your neighbours too. The shared line was fodder for newspaper etiquette columnists for decades. If someone needs to call the emergency services? They cannot, until whomever is already on the telephone ends the call. If they'd put a motorcar into a ditch far out into the countryside? They may have had to walk a country mile just to reach a farmhouse which had the party line telephone.

And the gossip that's fuelled by all of the neighbours being able to hear each other's calls? That could pretty much be a trope in itself... especially in small-town rural areas where everyone knew everyone else already.

In rural communities, many subscribers were glad just to have a telephone at all; in a few places, they had to run their own wires as far as the main road just to connect to the utility services. Manual switchboards with live operators who knew everything going on in the village were common in the most rural areas, where numbers often had odd formats like "123R41" (which asks the operator to ring line 123 with four long rings and one short) to reach distant farmsteads. Automated exchanges (which, in party line, invariably means rotary dial) typically had numbers which looked the same as the number for a private line telephone.

In both world wars, shortages of copper and strategic metals meant that these were the only lines available to most new subscribers, with shortages continuing in many areas for a few years after the armistice. In the most remote rural areas in the 1930s and 1940s, ten or more subscribers on one line was not uncommon – and a call to one of the phones often sent half (or all) of them ringing in some particular pattern. The furthest points in the desert may have had "toll stations" - phones where every call in or out had to go through the long-distance operator as the lone telephone line had no local calling area at all. In the most truly remote places, even a Pay Phone might have been sharing the same line with everyone else... and there would be no Cell Phone service in the most remote places, even today.

In the postwar era, telephone companies offered four-party suburban residential service as an inexpensive alternative vs. more expensive rates for two-party and private line subscribers. Most of the rapidly-growing suburbs upgraded to private lines and city-style infrastructure relatively quickly, with party lines largely forgotten by the end of the 1960s. Quite a few universities kept party lines in individual student residence rooms until the late 1980's. Their inability to support client-owned equipment like modems and answering machines ultimately became a fatal limitation; the US dropped from 4.6 million party lines in 1985 to 2.8 million in 1987, with their use tumbling rapidly as home computers began to go online en masse in the 1990s. University dormitories which were constructed in The Fifties, originally with one pay phone per floor and no in-room telephones, may well now have hard-wired broadband network connections in every room as Technology Marches On.

Now largely a Forgotten Trope. The last holdouts were, predictably, rural with maybe five thousand US subscribers still connected to some form of party line at the turn of the millennium. Even there, party lines were dying as they didn't qualify for most government rural infrastructure subsidies, didn't support Enhanced 9-1-1 for distress calls, didn't support any of the features of electronic or digital switching systems (call display, call waiting, call forwarding...) for which landline telcos could routinely charge extra. Mobile service is now available in at least a few of the rural areas which once had party lines, and the adoption of fixed-wireless (or, in very remote areas, satellite) Internet was the final nail in the party line coffin. Arguably, the worst of the rural Internet is still a poor-quality shared connection, but at least the loudest of the grievances have been silenced as neighbours are no longer hearing each other's conversations when they pick up the receiver to try to make a call.

Examples of Party Line Telephone include:

Retrieved from "https://allthetropes.org/w/index.php?title=Party_Line_Telephone&oldid=1765848"
Categories:
Cookies help us deliver our services. By using our services, you agree to our use of cookies.